"The Gospel According to Artyom' is in fact the last chapter of Metro 2033 and the first chapter of Metro: Last Light, linking both stories together and giving an unexpected insight on what really happened in the beginning of it all. Reading it will change your understanding of my saga," said Dmitry Glukhovsky.

Glukhovsky is said to have contributed a great deal of dialogue for the upcoming Metro: Last Light, as both games have been based upon his original Metro 2033 novel. The third book in the series, Metro 2035, will be available outside Russia this year.

Metro: Last Light will be available on May 14 for Xbox 360, PlayStation 3, and Windows PC. The Gospel According to Artyom will be available exclusively to individuals that pre-order the game through Steam and other retailers. 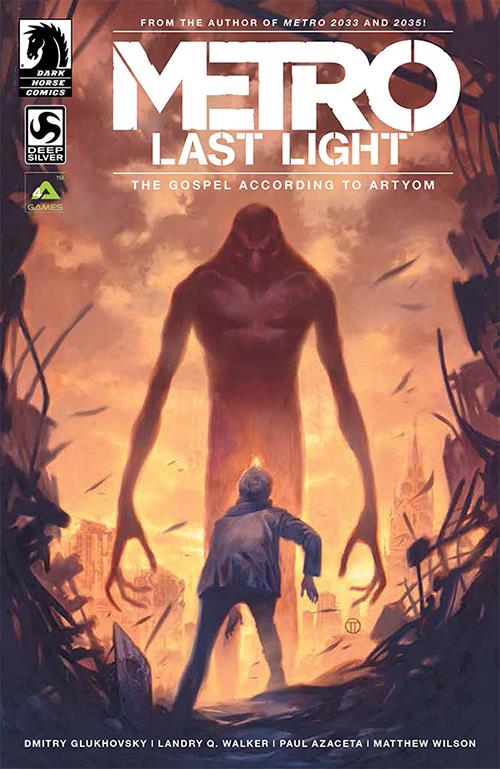 APRIL 18, MILWAUKIE, OR–The next generation of video game comics arrives from Dark Horse and Deep Silver this May! The Gospel According to Artyom, a Metro: Last Light digital graphic novel, is a unique collaboration between Metro 2033 author Dmitry Glukhovsky and Dark Horse Comics.

Metro: Last Light is a first-person-shooter video game and the highly anticipated sequel to the extraordinary Metro 2033. In the year 2034, a nuclear war has turned the world into a postapocalyptic wasteland. In Moscow, the tunnels of the Metro have become a new home for the former inhabitants of the city. Within the catacombs, they fight for their survival, fending off hordes of hideous mutants born from the toxic atmosphere, as well as other factions desperate to take control of what little hospitable land remains. As they fight, they also search for a doomsday device that could be the key to their victory. A civil war is inevitable. During these dark hours, the players will embody Artyom and become the last light for all of mankind.

Telling the story of Artyom between the fateful events of Metro 2033 and Metro: Last Light, the digital graphic novel The Gospel According to Artyom is available exclusively to customers who preorder Metro: Last Light through Steam and other selected retailers worldwide.

"The Gospel According to Artyom' is in fact the last chapter of Metro 2033 and the first chapter of Metro: Last Light, linking both stories together and giving an unexpected insight on what really happened in the beginning of it all. Reading it will change your understanding of my saga," said Dmitry Glukhovsky.

The novel Metro 2033 served as the inspiration for the creation of both video games, and Glukhovsky personally contributed a huge volume of dialogue for Metro: Last Light. Glukhovsky’s novels Metro 2033 and Metro 2034 have sold more than two million copies worldwide. In 2013, his latest book, Metro 2035, will be available outside of Russia.

For more information and a list of participating retailers, visit EnterTheMetro.com.

Metro: Last Light is set for release on May 14 in North America and May 17 across the rest of the world.

About Dark Horse Comics
Founded in 1986 by Mike Richardson, Dark Horse Comics has proven to be a solid example of how integrity and innovation can help broaden a unique storytelling medium and establish a small, homegrown company as an industry giant. The company is known for the progressive and creator-friendly atmosphere it provides for writers and artists. In addition to publishing comics from top talent such as Frank Miller, Mike Mignola, Neil Gaiman, Brian Wood, Gerard Way, Felicia Day, and Guillermo del Toro, and comics legends such as Will Eisner, Neal Adams, and Jim Steranko, Dark Horse has developed its own successful properties, including The Mask, Ghost, Timecop, and SpyBoy. Its successful line of comics and products based on popular properties includes Star Wars, Mass Effect, Buffy the Vampire Slayer, Aliens, Conan, Emily the Strange, Tim Burton’s Tragic Toys for Girls and Boys, Serenity, and Domo. Today Dark Horse Comics is the largest independent comic book publisher in the US and is recognized as one of the world’s leading publishers of both creator-owned content and licensed comics material.

About Deep Silver
Deep Silver develops and distributes interactive games for all platforms. The Deep Silver label means to captivate all gamers who have a passion for thrilling gameplay in exciting game worlds. Deep Silver works with its partners to achieve a maximum of success while maintaining the highest possible quality, always focusing on what the customer desires.

Deep Silver has published more than 200 games since 2003, including own brands like the critically acclaimed zombie action franchise Dead Island, action role-playing games from the Sacred world, successful adventures such as the Secret Files series and the role-playing realms of Risen. Upcoming highlights from Deep Silver include the next title in the Saints Row franchise, Sacred 3, Dead Island Riptide and Metro Last Light. Deep Silver also owns the development studio Volition based in Champaign, IL, USA. For more information please visit www.deepsilver.com

About Koch Media
Koch Media is a leading producer and distributor of digital entertainment products (software, games and films). The company's own publishing activities, marketing and distribution extend throughout Europe and the USA. The Koch Media group has more than 18 years of experience in the digital media distribution business, and has risen to become the number one distributor in Europe. It has also formed strategic alliances with numerous games and software publishers: Bethesda, Capcom, Kaspersky Labs, NC Soft, Sega, Square Enix and Tecmo-Koei, etc. in various European countries. With Headquarters in Planegg near Munich/Germany, Koch Media owns branches in Germany, England, France, Austria, Switzerland, Italy, Spain, the Nordic regions, Benelux and the USA. www.kochmedia.com