Shin Megami Tensei IV is getting a limited edition

by: Russell - posted: 4/17/2013 10:34:00 PM
More On: Shin Megami Tensei IV
Two weeks ago I posted that the original Shin Megami Tensei RPG series was returning after a decade-long hiatus with Shin Megami Tensei IV on the 3DS.  Well Atlus has decided that the game's first printing will be a limited edition box set.  This box set will contain a strategy and design book, a music CD that contains music from the Shin Megami Tensei series, and a collectible slipcase packaging.  Shin Megami Tensei IV will be released this summer for an MRSP of $49.99.  That might be a little much for a 3DS game, but as much as they're hyping it up it sounds like it might be worth it.  Just remember that the book and CD are limited to only the first run of the game. 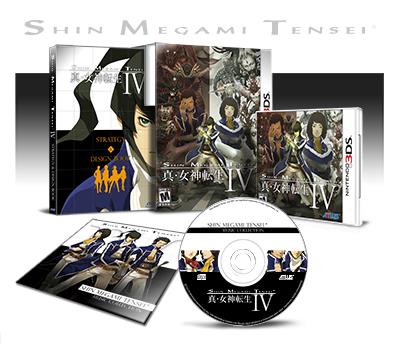 ​Exclusive to First Printing: Shin Megami Tensei IV will be a Limited Edition Box Set
IRVINE, Calif. -- April 17, 2013 -- Shin Megami Tensei IV (SMTIV) will launch as a premium RPG title for the Nintendo 3DS™ system and will include several items to aid Samurai as they serve the Eastern Kingdom of Mikado by battling hordes of demons. In addition to being a fully voiced title that takes advantage of the 3DS system's 3D and StreetPass™ functionalities, Shin Megami Tensei IV will include:
All bonus collectors' items are limited to the first printing of SMTIV; subsequent printings will only include the SMTIV game.

The story of SMTIV revolves around the Samurai, the sacred protectors of the Eastern Kingdom of Mikado. As a newly appointed Samurai, players will struggle with factions that have nefarious designs on the world as they defend their home kingdom from a growing army of demons. Decisions players make throughout the course of the story will have lasting repercussions, as the fate of the world hangs in the balance.

Shin Megami Tensei IV will be exclusive to the Nintendo 3DS system and sold as a premium title beginning this summer. The game is rated M for Mature by the ESRB. More details will be revealed in the future, with updates on the official SMTIV website at http://www.atlus.com/smt4.