Phil Ring, producer at TT Games, unveiled the first level of LEGO Marvel Superheroes at GDC. The section only showed a small part of the entire game, but acted as a microcosm of things to come when the game releases this fall.

There are memorable locations from both real life and the Marvel realm, Ring said. “You’ll see the Statue of Liberty, but with a LEGO twist.

“We want to push things, do it bigger and better.”

One such example of “bigger” presents itself as the level opens on Grand Central Station, New York’s long-standing subway hub. Surrounded by indoor sand dunes, the villain Sandman shouts through a microphone, something about “cosmic bricks,” which Ring promises will play an important part in LEGO Marvel’s story.

Along with Sandman is Abomination, the towering mass of muscle and grit created from the same gamma ray exposure as the Hulk. Although Sandman’s normal form fits well within the constraints of the LEGO mini-fig size, Abomination and Hulk’s forms do not.

Cue BIG-figs: LEGO figures triple the size of mini-figs. Aside from their imposing size, characters such as the Hulk and Abomination come with their own powers. Appropriately, these two can lift huge objects, smash through barriers, and generally cause damage on a larger scale than most of the roster.

These abilities are a small taste of the powers relegated to LEGO Marvel’s entire cast. TT Games is stressing that, like LEGO Lord of the Rings and LEGO Star Wars, LEGO Marvel won’t just feel like a game for LEGO fans, but fans of the license as well.

LEGO Marvel has a “fantastic story written by Mark Hoffmeier,” who has written for Marvel on several occasions, including Marvel Super Hero Squad. TT Games promises the story remains true to every aspect of Marvel, from character relationships to their abilities.

This is illustrated shortly after Abomination is introduced. The Hulk and Iron Man proceed into “Sand Central Station” to end a hostage situation orchestrated by Sandman. Using cooperation between separate characters and their respective abilities ends Sandman’s efforts, and brings the level to its end.

Ring promised classic match ups in iconic locations throughout the remainder of the game, and like TT Games other titles, ensure that the experience is loyal to the license. 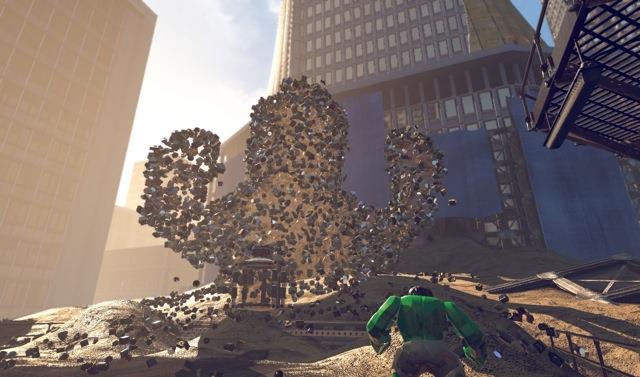