by: John - posted: 4/5/2013 5:22:00 AM
More On: Xbox One
Rumors keep swirling around that the next Xbox will have to always be connected to the Internet with some saying you'll have about 3 minutes of leeway before you can't play a game. I haven't posted anything about it yet just because things can change pretty quickly and if I posted every single rumor there was on the Internet on consoles, well, let's just say I don't think it serves anything other than to get people riled up.

But, when Microsoft Creative Director Adam Orth chimes in, well then it does add a little more to the rumor doesn't it? His Twitter used to be public, but now it's gone private. Why? Well probably because of this exchange: 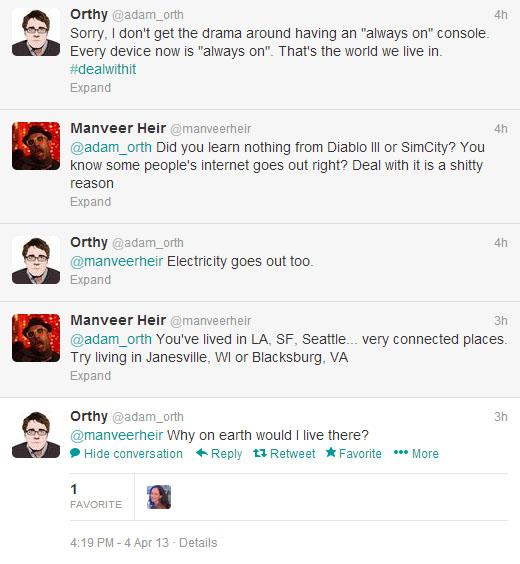 Now, some friends have gone on out there and say he's joking, but when you are in a certain position, certain jokes can really spiral out of control, if this is indeed a joke.

It's a critical time for both Microsoft and Sony since both are going to unveil their consoles this year with Sony firing the first shot, albeit without showing the console itself. If you're Microsoft, you really don't want to do anything to upset the masses.

In truth, we don't know if Microsoft plans on forcing you to be online with their console just yet. Until they come out and say they do, everything should be taken with a grain of salt. Even if those people are the ones with dev kits and such, just because those can operate on different parameters than the final consumer product.

But, Microsoft's employees should probably just watch a little bit more of what they say on public channels. Just a suggestion.