I sat down with Insomniac CEO Ted Price at GDC to play the Ratchet and Clank developer’s first Xbox 360 title, and their first new IP since the browser-based Outernauts.

“It’s always hard,” he says. “New IP is tough. We like doing it because it’s a great challenge, but figuring out the sweet spot for your story and the gameplay takes a lot of experimentation and prototyping.”

The premise of Fuse is simple: the titular alien substance grants powerful weapons capable of doing things normally unheard of, an area where Insomniac has excelled in all of their properties. The first level follows the four playable characters as they travel to a Rapture-like underwater base off the coast of China, the last known location of the Fuse source.

“Fuse [didn’t use to be] part of the game,” Ted says. “It was purely a plot device. It felt disconnected, so we realized we had a perfect opportunity to integrate it into the gameplay –– by having it power these weapons … it was one of those magic pieces of the puzzle we needed to insert to make the game coherent.”

Ted and I begin the demo without our character-specific weapons, but he promises we’ll have the chance to try them out soon.

As we’re escaping our prison cells –– which we’ve been thrown in since the enemy discovered our intent to recover the Fuse source –– we sneak through several rooms full of bad guys, using stealth takedowns and platforming to traverse each situation.

As we progress through each section, Ted explains the balance Insomniac has been working to strike between single player and cooperative play sessions.

To illustrate the ease with which I can switch between characters, Ted opens up a wheel. From there, all that’s needed is a simple button press to choose a different character. This sends the camera sweeping to position itself over the shoulder of the chosen agent.

I opt to play as Naya, the assassin gifted with active camouflage. Should I grow tired of her, I can switch to the healer Izzy in a matter of one or two seconds, depending on how certain I am of who I want to play with.

A skill tree is relegated to each character, presenting experience-based upgrades focused on equipment or ability improvements. These skill trees differ depending on the archetypes each player chooses. Someone playing as Dalton might choose buffer upgrades to help the team, while another playing Jacob could obtain Fuse grenades to supplement his already high damage.

Playing as any combination of two of the four characters, Ted and I proceed into a room filled with enemies. We still haven’t found our Fuse weapons yet, so we pick up burst rifles a recently deceased pair of enemies dropped.

Experience earnings pop up on screen, indicating that we’re doing something right. In addition to experience, I note something called Fuse points. This currency, Ted tells me, is used to unlock team perks. If a group is playing cooperatively, they can select their own perks individually, while one player can assign the perks to bots if they’re playing alone.

Another mode, called Echelon mode, is described as a wave-based mode that allows players more Fuse points to spend. Although it isn’t shown in the demo, Echelon seems tailor made for a cooperative minded game such as Fuse.

After fighting through a few more rooms and climbing a few more walls, we finally find the lauded Fuse weapons. Naya receives her Warp Rifle, a gun capable of creating black holes, Jacob receives a damaging crossbow, and Izzy a weapon that can crystallize enemies.

Whereas Dalton was using an enemy assault rifle before, he now has his Magshield –– an expansive shield capable of shotgun blasts at close range.

If the game is MMO-inspired, there must be a tank. Cue Dalton. He protects the group, earning experience for absorbing enemy bullets and explosions.

There is a standard amount of cannon fodder streaming at us, but a mini-boss with appropriately sized mini-gun approaches after a cutscene.

This enemy requires interplay between every character: Dalton’s shield wall and Magshield blasts keep enemies and bullets at bay, while Naya uses her camouflage to flank the behemoth. With Izzy providing healing and Jacob letting loose with his damaging crossbow, the battle is over as quickly as it started. A hefty amount of experience and Fuse points seal the deal.

The weapons and abilities of Fuse are easy to figure out. As the demo progressed and enemy snipers and close-quarters combatants broke up our established strategy, it was clear there was need for adaptation. Players will have the chance to grit their teeth on Insomniac’s new title on May 28. 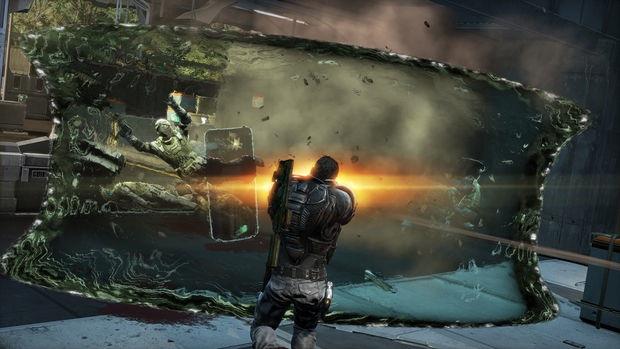