GDC 2013: Netherrealm reveals new features for Injustice: Gods Among Us

The S.T.A.R. Labs side content acts like the Combat Tower in 2009’s Mortal Kombat, also developed by Netherrealm. Alternate universe fiction permeates these smaller story-centric chapters; Superman: Red Son, in which the Kryptonian lands in Siberia instead of Kansas, is included in this feature.

Netherrealm promised a staggering number of missions for S.T.A.R. labs, which supplement the sizable single player storyline. The campaign, which Netherrealm says is going to be more accessible for players not accustomed to fighting games, has 240 missions.

An example of this accessibility is Injustice’s tagging system. In a separate pause screen, combos can be selected to appear at the top of the screen during fights. Netherrealm said that casual fighting fans can use this to surpass the amount of memorization that experts practice.

Injustice also shows frame counts and combo times for players with professional experience in the fighting genre. Aquaman’s combo list is placed next to said statistics on his pause screen.

Speaking of, the Defender of the Seas was also shown at Netherrealm’s GDC demo. In an attempt to make Aquaman “cool for the first time,” his ultimate power attack sends a wave crashing at his opponent, complete with sharks and other sea creatures. The lucky enemy is held aloft on the tip of Aquaman’s trident, only to be snatched by a Great White moments later.

Netherrealm also revealed a mobile Injustice: Gods Among us, although details are scarce at this time. 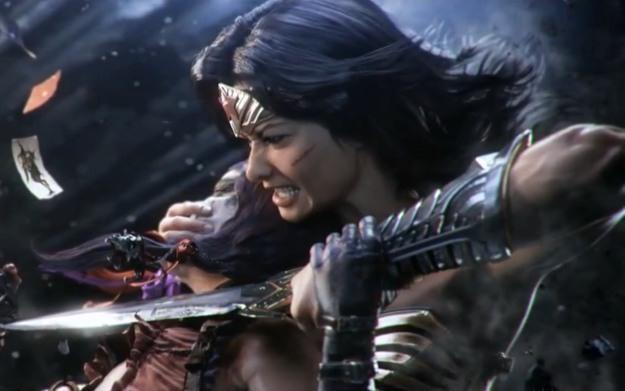