GDC 2013: Breaking the fourth wall in Knights of Pen and Paper

“The game makes fun of itself,” Ronaldo Nonato, lead designer at Behold Studios, said. Like many classic RPGs, battles can be avoided by escaping if a dice roll is good enough. In Knights of Pen and Paper, however, it’s called “chickening out.”

There are numerous nods to real world items as well, such as pizza and coffee, but also pop culture allusions like the “Samurai Turtles” players fight later in the game. This lighthearted vibe is almost as accessible as the gameplay is.

Players control everyone in Knights of Pen and Paper, aside from the enemies. They’re the dungeon master and anyone else participating. It allows them to plan their quest, map their own course, and execute their plans however they see fit. As the dungeon master, players can even choose how many enemies they’ll have to fight; better rewards follow harder battles.

The gameplay demonstration opens on a party beginning a tabletop RPG, such as Dungeons and Dragons. The cast is made up of real world stereotypes: the pizza delivery guy, the nerd, the little brother, and even the hipster.

“These are people we all know,” Nonato said. “We have neighbors like this.”

The realities of these personas translate into the classes and passive abilities of the characters as well. Each character falls into a specific RPG archetype of the player’s choosing, be it mage, hunter or healer, among others. However, passive abilities are derived from real world references. For example, “drinkers” use potions more effectively.

The Plus One Edition thrives off of player feedback, adding several prominent features that will streamline the whole experience.

In the original version, players needed to delete a character if they wanted to experiment with a new one. In the Plus One Edition, the tavern removes this inconvenience. Here, players can alter their party makeup and experiment with new classes. All they need to do is temporarily bench an existing character they’ve come to like.

Random combat makes the use of these characters more fun than it was in the past. Battles were repetitive and predictable. Now, they’re random; still strategic, but more thrilling as they unfold.

Nonato wants to drive the gameplay forward with these new updates. “It’s not just killing for fun. There’s a reason to it all.” 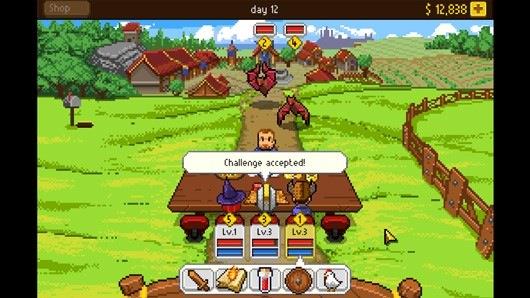