by: Mike - posted: 3/26/2013 3:22:00 PM
More On: GDC 2013 Magicka: Wizard Wars
Paradox Interactive has been developing games for about 15 years now. In the past, their focus rested mostly on strategy games. Paradox North, however, is setting their sights on fast-paced action. The recently announced Magicka: Wizard Wars is a manifestation of this focus.

The objective is simple: kill all enemies. Placed in a PvP arena, players must destroy any opposition while still taking control of respawn points. Should a team capture all of these beacons, the only remaining hope for the enemy is to survive long enough to retake a beacon, ushering their deceased partners back into the fight.

“It’s very skill-based,” David Nisshagen, lead designer, said. “It’s about reading your opponent’s moves, it has nothing to do with being a higher level or using the correct item.”

Skilled Wizard Wars players will be able to read their enemies forthcoming attacks thanks to Paradox’s “fighting game feel.”

This formula allows players to react, calculating just which element to counter with or how best to block the wall of fire hurling toward them. A “fast-paced, fun to play, player versus player action game,” as John Hargelid, executive vice president of Paradox North said.

“It’s something you don’t normally see in things like this. If you attack with fire, I can use a water spray to counter."

Nisshagen describes the clever usage of the hundreds of spells as astounding. “We watch new players find new ways to combine all of the spells, and it’s really surprising how balanced it is and how many ways there are to play.”

This emergent gameplay fuels the game, Nisshagen said. There are several “layers” the development team focused on during production of their current pre-alpha build, consisting of one-on-one combat, character customization, and team mechanics.

Player experimentation and implementation are what makes these layers work though, Nisshagen said. Players learn from their mistakes and adapt to new situations, creating a gameplay loop that emerges from the mechanics Paradox has put in place.

“We’ve already had responses to the game,” Nisshagen said. “People say they want [this], so we say, ‘okay, if enough of people want that, we’ll put it in.’” 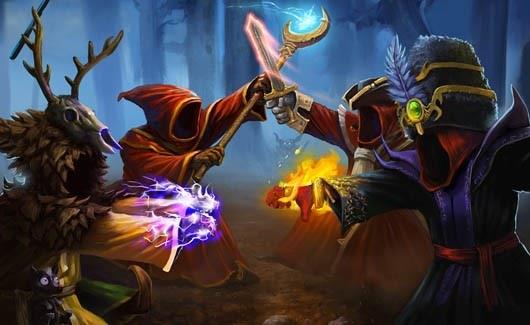