by: Mike - posted: 3/25/2013 4:52:00 PM
More On: Star Trek GDC 2013
Star Trek, the upcoming licensed title from Digital Extremes, has a few friends on its side. Digital Extremes, the developer that worked on Unreal Tournament, is at the wheel, with Paramount Pictures riding shotgun. The film studio led the series reboot with Star Trek in 2009, and its involvement is immediately apparent.

Brian Miller, senior vice president at Paramount, notes the parallels between the game and the movie during a demonstration. Actors like Simon Pegg and Chris Pine are portrayed, Kirk and Spock have the same back-and-forth banter, and the score itself is identical to the movie.

The score is a result of a 100-piece orchestra, with music composed by Michael Giacchino, who worked on the film as well. Cutscenes and action sequences play out to the same music that permeated 2009’s Star Trek outing, so much so that Miller’s favorite compliments are that “the game feels like Star Trek.”

Although the game does have obvious nods to the film, Digital Extremes and paramount want to make sure they’re telling a story that hasn’t already been told, and won’t be told again in any other form, even film.

Miller said that Star Trek, the game, will be canon, but tell an untold story; it’s not a tie-in that is aimed at supplementing the films, it’s an attempt to create a fully realized story in itself.

“Why we’re making the game is almost more important than the game itself,” Miller said as Spock neck pinches an unaware enemy in the demo. “We want to break the myth that you can’t make a good movie-based game.”

The hands-on demo begins with a tutorial mission on Helios, which plays an important part in the game’s plot, according to Digital Extremes. Kirk and Spock alight on a station near Helios, where I take control of Kirk. The cooperative gameplay of Star Trek allows another player to take control of Spock, whom Digital Extremes promises will have abilities –– like the iconic neck pinch –– based around stealthy approaches.

My co-op partner and I sprint through the station dodging solar flares. Taking cover behind embankments protects us, so our progress is hindered every few meters. The sequence takes a novel approach by letting us create our own cover; shooting panels on the ground raises more embankments on our trek.

The rest of the hands-on demo is basic third-person shooting as we mow through a variety of Gorn enemies ranging from smaller pawns to armor-clad commanders. Alternate firing modes put a twist on each weapon, like a grenade launcher or the Kirk’s favorite stun mode, creating more ways with which to dispatch the Gorn. 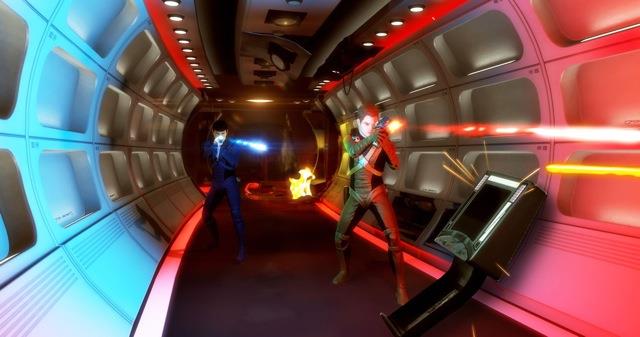