There’s a little Magic in the air at Raptr

by: Jeremy - posted: 12/3/2012 11:34:00 AM
More On: Raptr Magic the Gathering- Duels of the Planeswalkers 2013
December is bringing a sensation of magic in the air over at the Raptr community... but not in the way that you think. We’re talking magic in terms of Magic the Gathering!

Raptr and Wizards of the Coast are teaming up this week to give away 5,000 PC codes for Magic the Gathering: Duels of the Planeswalkers 2013 Deck Pack #1. The recently launched DLC pack adds 2 completely new decks to the game in the form of Sky and Scale and Act of War. The giveaway will be available for the first 5,000 Raptr members who meet the requirements and redeem the award through their profile starting December 5, 2012.

In addition to the giveaway, Raptr will host an exclusive Q&A with Magic’s Ken Troop (Digital Games Manager) and Max McCall (Designer) to give fans a deeper insight into the Duels franchise. Interested gamers should head over to Raptr for all of the details. 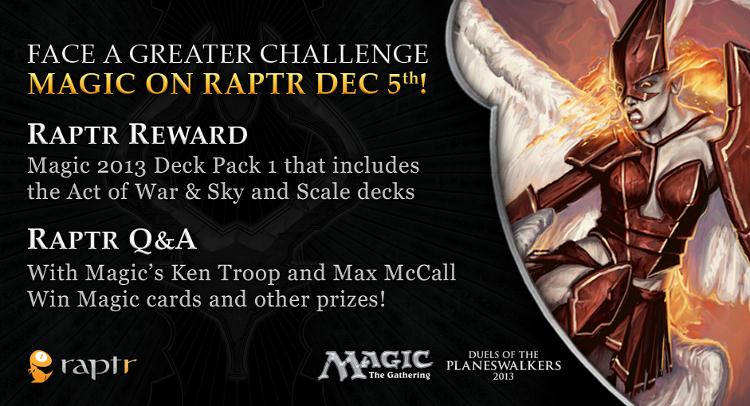