by: Matt - posted: 6/11/2012 6:00:00 PM
More On: The Last Story E3 2012
I'm kind of bummed that XSEED Games didn't have a bigger booth at this years E3. Instead they were tucked away in the smaller conference room halls, showing behind-doors demos of some of the most exciting games to be coming out this year. The Last Story is one of those titles. Developed by Hironobu Sakaguchi's Mistwalker studios, it is one of the games that Operation Rainfall has been working hard for to see it released in the US. Thankfully XSEED Games took up the responsibility of publishing here in the states and it will be released later this summer. And if the demo that XSEED Games Localization Specialist, Thomas Lipschultz gave is any indication, it's a good time to be a Wii owner.

The short fifteen minute demo took me through a really interesting looking town, and for a Wii title this game looks pretty damn good, and while I am spoiled on next generation hardware, the look of the game is still pretty impressive. The town in the demo was littered with people and a lot of really small touches that stood out. Tom knocks over a basket of fruit that falls to the ground, if an NPC walked over the fruit, they'd slip and fall, the same went for Tom if he ran over them. He could walk in to signs and his character would react appropriately. Hell, he even took out a crossbow and fired banana peels at people, sending them flying to the ground. The little touches in the short time I saw the game were really impressive.

Of course that doesn't mean squat if the game doesn't have a good battle system, and The Last Story looks to have a unique take on combat. It's difficult to describe, but basically its overall strategy that will win a fight, not simply brute force. Tom put his team in to place, with lead character Zael taking point by hiding behind a wall, he'd distract an enemy unit to draw them out, rather than the whole cluster of foes, and would slowly pick them off one by one. He then rushed headlong in to battle and quickly found himself overwhelmed, just to show that it's not always wise to rush in to things. A later battle had items around the field that could be picked up and used that would leave residual magic effects on the field. These effects could be spread and dissipated on the field with a gale attack, this in turn would do some damage to enemies in range and give a side effect, usually a status effect like silence or poison.

Though it was a really short demo, it gave a good feel of the game, and showed that Hironobu Sakaguchi and the team at Mistwalker have created a fine game. Thankfully XSEED Games will be releasing it later on this summer. 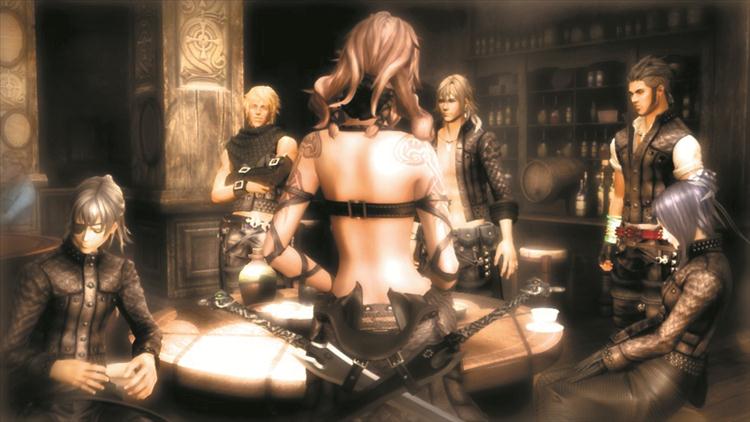