by: Matt - posted: 6/11/2012 4:00:00 PM
More On: E3 2012 The Cave
Sega had a behind-doors demo of The Cave on hand, the latest title from Double Fine and Ron Gilbert, and I had a front row seat in what looks like one of the most endearing and comedic releases in recent memory. Taking place in, well, a cave, players will guide a cast of seven characters, selecting three at a time, to dive through the cave, to solve puzzles and find items that each person exploring the cave is searching for. It sounds kind of basic at the outset, but the game will have an interesting narrator, the cave itself. The cave has seen a number of people come and go, and has stories for all of them.

The short demo took us through a level with three of the characters who navigated a puzzle to get a bucket of water to a vending machine. This in turn produced a rather large hot dog, that was used to feed a monster lording over a pile of bones. Placing the hot dog in the bone pile lured out the monster that would ordinarily kill the players, which left him vulnerable to being grabbed by a crane, allowing the players to pass. This gameplay evoked a lot of feelings of The Lost Vikings, but was very forgiving as a death didn't cause the level to restart.

A second level highlighted a knight character that is trying to win the eyes of a princess and her necklace, and to do so he must collect a treasure from the dragon that resides under the castle. The dragon is obviously not going to let the knight just have what he wants, so he will roast any character that gets close. The knight has an ability that lets him become invincible, allowing him to draw the dragons attention, which allows one of the other characters to sneak in and grab the treasure. However in our demonstrator's rush to get the treasure back to the princess, he forgot to close the gate that kept the dragon trapped. And sure enough, the dragon is out wreaking havoc as he made his way back to the princess. Unfortunately his haste has lead to the princess being devoured by the dragon, but he received the necklace when the dragon spit it out, so all is well I suppose. This is just the first example of a number of ways a puzzle can be solved, offering up a reportedly great deal of options.

It was an early demo, but The Cave has a lot of potential to elicit a lot of laughs and provide some spot on puzzle solving when it is released later this year. 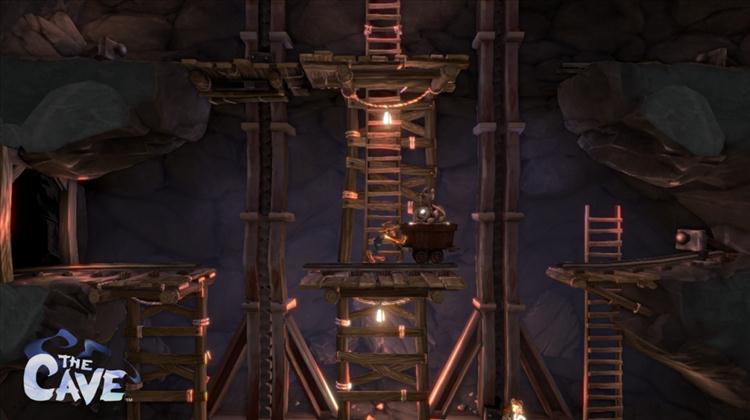