First up, they have some new products in conjunction with Guild Wars 2. Three new mice pads with some very cool designs were showcased. The large mice pads featured two character designs for Guild Wars 2 or a slick dragon emblem that can appeal to both fans of the game and those that aren’t familiar with the series. They will retail for $15

To control the game, SteelSeries has a Guild Wars 2 branded mouse in the shape of the Sensei. This Guild Wars 2 Gaming Mouse has a sharp color scheme featuring a white surface with a red dragon design on top. Underneath there’s a 5700CPI laser sensor and on top is a red glowing mouse wheel. The mouse can be used by both right and left-handed gamers and features seven programmable buttons. After setting up the mouse, you can save the profiles on the mouse itself to take with you. I really do like how it looked up close and seeing that it’s a no frills mouse that’s high on performance, this could be one to get for those looking for a good quality mouse to game with. It’ll retail for $70 when released. 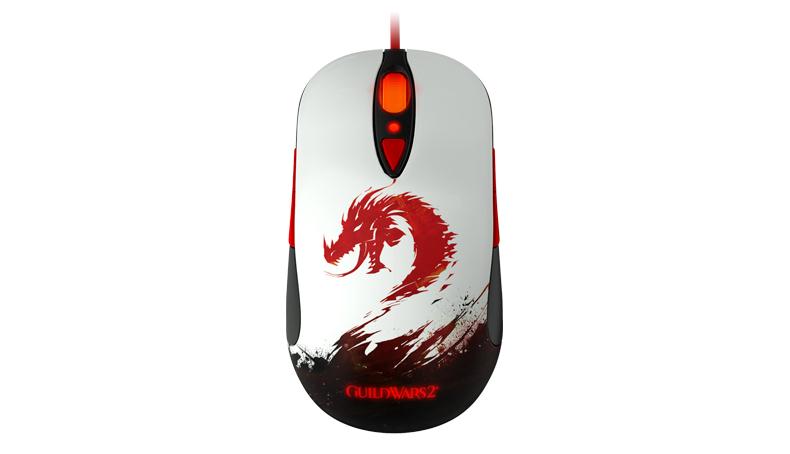 Finally to round out the Guild Wars 2 products being shown at E3, there’s the Guild Wars 2 Headset coming in at $100. It’s got the white and red color scheme like the mouse and mouse pads and it’s made for portability. It can lay flat and fold up nicely for on the go. 40mm neodymium drivers deliver nice sound and the headset features a detachable cable setup. The cable can be plugged into either side and another person can daisy chain a headset to yours on the one side that’s not being used and listen in on what you are listening.

SteelSeries is continuing their partnerships with products branded for DOTA 2 as well as Counter-Strike: Global Offensive. They both will feature Kana mice and mice pads if you are fans of the game. The Counter-Strike group of products will also get a SteelSeries Siberia V2 headset, which is an awesome headset that I still use today. I was told that Valve was really involved in designing the branding on the three products, which is great when two companies can work together closely on products.

SteelSeries is also putting out more MLG styled products and have a Sensei mouse with their logo and color scheme as well. 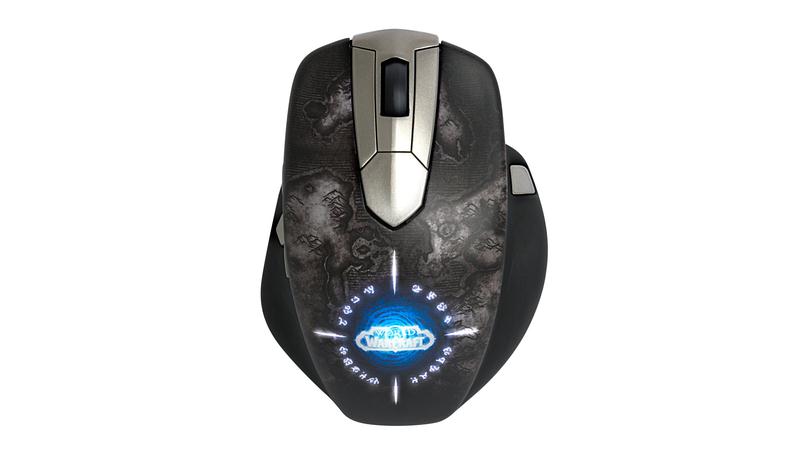 Instead of just slapping buttons on left and right, SteelSeries used some thought in making sure button placements make sense and are easy to access. They didn’t want you thinking what button you were pressing so how they set it up makes it so that you’ll be in control and press the button you want.

The top of the mouse has a nice looking map and glowing vortex with World of Warcraft in the middle. It’s not an over the top design and those that aren’t fans of the game might even like the medieval scheme.

On the bottom is an 8200 CPI laser sensor and you’ll be able to choose your sensitivity on the fly. You should get 16 hours of usage with one charge and it should only take about an hour to fully recharge itself.

The charging base is pretty damn slick as it’s got a cool design like a mountain with emblems on the side. When not charging, you can take the cable from the charging base and plug it straight into the mouse. Doing so will turn off the wireless engine and it will work just like a regular wired mouse while it charges.

$130 should be the price and you can expect this pretty cool mouse in the third quarter of this year.

So that’s SteelSeries. They have some great partnerships lined up and one pretty cool looking wireless mouse at the show. I did ask about plans for some noise cancelling headphones and they did have some products on their roadmap, but we’ll have to wait a bit longer before we see them. I’d like to thank SteelSeries for their time at E3 and look forward to all their products coming out this year.