Dead Island also getting Game Of The Year edition

The GOTY edition of Dead Island will release this summer for Xbox 360 and PS3 and will include the Ryder White single player story arch, the Bloodbath Arena mode and a blueprint for the Ripper Weapon mod

Man it seems like multiple games are awarded the prestigious "Game Of The Year" honor each year. I gave my opinion about these GOTY editions in the Red Orchestra 2 story. Sure its great for people that may not have bought the game the first time around but it kinda feels like a slap in the face for early adopters per-say as said DLC content never drops in price to match the price of the GOTY edition.

That aside I absolutely LOVED Dead Island and cant wait for a sequel. I thought it was a very ambitious title and was very fun. I cant remember the last time I had that much fun killing zombies with various weapons and the story wasn't bad either. 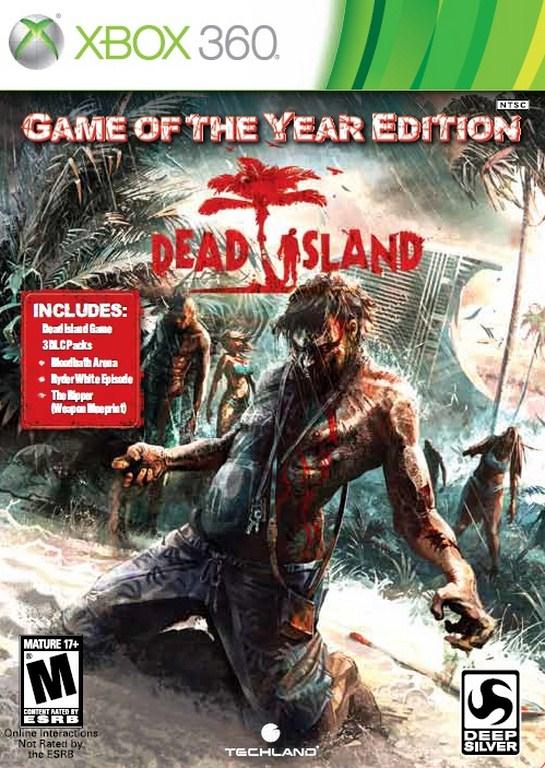 Deep Silver Announces
“Dead Island™ - Game of the Year Edition”
GOTY edition of the multi-million selling hit Dead Island will be released in summer of this year
LARKSPUR, CA – MAY 22, 2012 Deep Silver today announced the upcoming release of the Game of the Year Edition for the award-winning game Dead Island™.
Originally released in September of 2011, Dead Island was named Gamecritics.com’s 2011 Game of the Year and received multiple Editors’ Choice awards. Dead Island quickly became a fan favorite, topping the charts of #1 best-selling games worldwide during its launch and going on to delight over 3 million zombie lovers across the globe. This new edition gives players who are yet to experience the beautiful terror of Dead Island a version packed with content: including the Bloodbath Arena mode, the Ryder White’s Campaign single-player story arc and the blueprint for the highly-coveted Ripper weapon mod.
“There’s nothing more satisfying than gracefully tossing a normal, inconspicuous looking kitchen knife at some foul creature and bringing complete decapitation to their world,” mused Aubrey Norris, Deep Silver’s Manager of Suspicious Radio Voices, while wearing a smooth velvet smoking jacket and pouring a glass of some questionable-looking red substance on the rocks. “By unleashing – I mean, releasing- the Dead Island Game of the Year Edition upon the world, we feel that we are doing our part to empower the world with the ultimate survival tutorial. At Deep Silver, ladies and gentlemen, We. Make. SURVIVORS. *thunderclap*”
About Ryder White’s Campaign
Offering a new unique perspective into the main story of Dead Island, the player will play as Ryder White, the main game’s antagonist. Ryder White’s Campaign offers players the chance to learn more about his motivations and why, from his point of view, he did what he had to do, showing him both as a military man and a loving husband in a fresh take on the Dead Island story. The campaign includes a single player story arc with several hours of gameplay as well as two blueprints and weapons to further expand the already impressive arsenal of Dead Island.
About Bloodbath Arena
In Bloodbath Arena four different arenas offer new challenges that can be played alone or in coop mode. It’s a desperate fight for survival where waves after waves of unrelenting zombies attack, one more gruesome than the next! What’s more, characters can loot experience points and items and bring them over to the campaign mode as well as compare their skills in zombie elimination in the arena’s leaderboards.
The Dead Island – Game of the Year Edition will be released for the PlayStation®3 system, the Xbox 360® video game and entertainment system from Microsoft and Windows PC on June 26th, 2012 for a suggested retail price of $29.99. It is rated M for Mature by the ESRB.
For more information, visit one of the following official Dead Island portals:
Official website: www.deadisland.com
Facebook: www.facebook.com/deadislandgame
Twitter: http://twitter.com/deadislandgame

About Dead Island
Dead Island™, the gruesome zombie action game with RPG elements by renowned developer Techland, combines first-person action with a heavy focus on melee combat, character development and customization of a vast array of weapons. All of these gameplay features are presented in a dark story inspired by classic zombie movies with a gritty and engrossing campaign that can be played with up to four players in co-op mode.
Set in an open world tropical island, hordes of different festering zombies await players around every corner while they embark on a variety of thrilling missions through the holiday resort. With firearms and ammunition being scarce the player must rely on discovering and utilizing items as weapons for self-defense and fighting off zombie hordes in intense melee combat. A diverse range of items can be collected and will later serve to transform the player’s ordinary makeshift weapons into serious instruments of destruction.
About Deep Silver
Deep Silver develops and publishes interactive games for all platforms, seeking to deliver top-quality products that provide immersive game experiences driven by the desires of the gaming community. The company has published more than 100 games worldwide since 2003 including the #1 best-selling zombie action thriller, Dead Island™. Deep Silver, Inc. is a wholly-owned subsidiary of Koch Media, GmbH. For more information, please http://visit www.deepsilver.com.
About Techland
Techland is a leading Polish developer, publisher and distributor of PC and console games since 1991. Its proprietary Chrome Engine 5 technology is among the world's most advanced game engines, with full X360, PC and PlayStation®3 system compatibility. With a staff of nearly 200 specialists in two development offices in Wroclaw and Warsaw, Techland is committed to delivering top-quality titles for worldwide markets. Currently the company is working on several high-profile titles for consoles and PCs.

Microsoft, Xbox, Xbox 360, and Xbox LIVE are either registered trademarks or trademarks of the Microsoft group of companies.

Dead Island © 2012 by Deep Silver and Techland. All rights reserved.