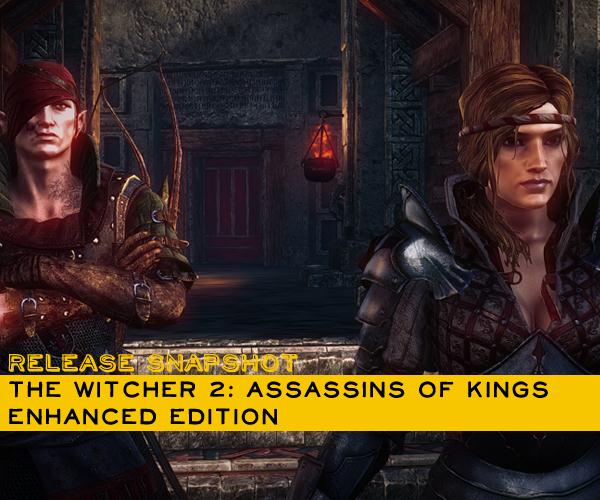 In their eight years as a developer and publisher, The Witcher 2: Assassins of Kings Enhanced Edition will mark the first console title released by CD Projekt RED. At this point in the process, most companies would have handed the project off for a hastily created and unpolished port that would simply pass as good enough. The development team at CD Projekt RED opted to redesign The Witcher 2 from the ground up as a native title for the Xbox 360. Not only have the gameplay and controls been optimized for the console experience, but as well as the game’s overall presentation with graphics tailored to the Xbox 360. The developers have not been shy to declare The Witcher 2 as one of the most impressive visual presentations on the console.

Current owners of The Witcher 2 on PC will also be happy to hear that the Enhanced Edition will be released as a free update on April 17, alongside its launch on the Xbox 360. Referred to as “...the richest version of the game,” the Enhanced Edition introduces fans of the series and newcomers to four additional hours of gameplay, 35 minutes of new cinematics and expanded cut-scenes, and all previous downloadable content including an arena mode and expansive tutorial system. The original game was already lengthy with numerous quests, but the Enhanced Edition now should offer an extensive amount of content for role-playing game addicts.
The two primary differences with The Witcher 2 and other role-playing games on the market are its mature themes and visceral combat. The Witcher 2 includes a wealth of mature elements that stray far away from the cringe-worthy attempts at nudity and sex, strong language, and gory violence in other recent game releases. If you've been disappointed with the lack of gripping and novel-quality narratives in recent games, rest assured that The Witcher 2 goes far beyond the traditional presentation of quests in role-playing games. Also, not many other games give players the opportunity to step into the role of an extremely skilled monster slayer. Most impressive of all, actions and decisions can have significant impact on gameplay that can result in completely different levels for each playthrough.

The other aspect that separates The Witcher 2 from other role-playing games is the inclusion of a visceral combat system that incorporates various attack styles and sword types for encounters with a variety of enemies. The wide range of attack animations, brutal finishing moves, and use of magic and potions combine for an intense combat system that should keep gamers engaged throughout the overall adventure. Add in the varied talent trees and extensive crafting system, The Witcher 2 will have role-playing fans intrigued till the last quest is completed.

The additional content with the Enhanced Edition is not simply digital, but also includes a set of bonus physical items. The Enhanced Edition includes a soundtrack CD, map of the game world, 90-page quest handbook for both novice and experienced series fans, and a complete game manual. Even better, all of these bonus items are included at the standard price for both its Xbox 360 and Windows PC versions. Most other developers and publishers would have charged extra for these items and put them into a collector's edition of some sort. If you're interested in the Enhanced Edition, be sure to visit the official Witcher 2 website for further details.

The Witcher 2: Assassins Of Kings Enhanced Edition will be available on April 17 for Xbox 360 and Windows PC.

Previous owners of The Witcher 2 on PC can now pre-load the Enhanced Edition game update, which is about 10 GB in size, from the official Witcher 2 website. In addition, every owner of the PC version, no matter where the game was purchased, can grab a DRM-free digital backup copy of the game from GOG.com.