by: Travis - posted: 3/8/2012 4:50:00 PM
More On: Ghost Recon: Future Soldier
GameStop has yet again secured an exclusive edition of a game with downloadable extras that aren't found anywhere else. Ubisoft posted an announcement trailer featuring the GameStop exclusive Ghost Recon Future Soldier 'Signature Edition' that contains a bonus Moscow Suburb cooperative multiplayer map, two in-game weapons, two weapon skins, and 48 additional headgear customizations. Not quite appropriate for use on a gun, one of the weapon skins feature Penny Arcade characters Twisp and Catsby. Fortunately, anyone that pre-orders the game at GameStop will receive a free upgrade to the signature edition. Unfortunately, you have to pre-order through GameStop to secure the exclusive content.

Tom Clancy's Ghost Recon Future Soldier will be available on May 22 in North America and May 24 in Europe for Xbox 360 and PlayStation 3. At this time, the release date for the PC version has yet to be announced. 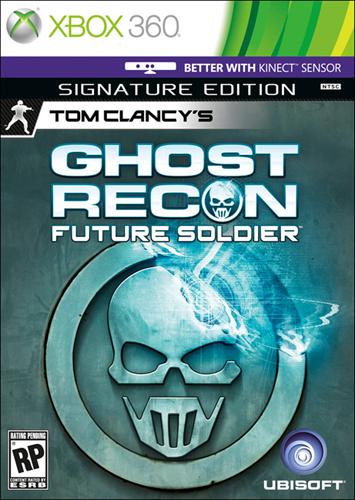