Skylanders Legendary Triple Pack back at Toys "R" Us

by: Russell - posted: 2/18/2012 1:32:00 PM
More On: Skylanders: Spyro's Adventure
If you've been looking to get your hands on the Skylanders: Spyro's Adventure Legendary Triple Pack exclusive to Toys "R" Us, you're in luck, as the pack has been brought back to store shelves worldwide.  The Legendary characters in the pack all have stat boosts that aren't available for their standard counterparts.  The characters included are Legendary Bash (Earth), Legendary Chop Chop (Undead), and Legendary Spyro (Magic). 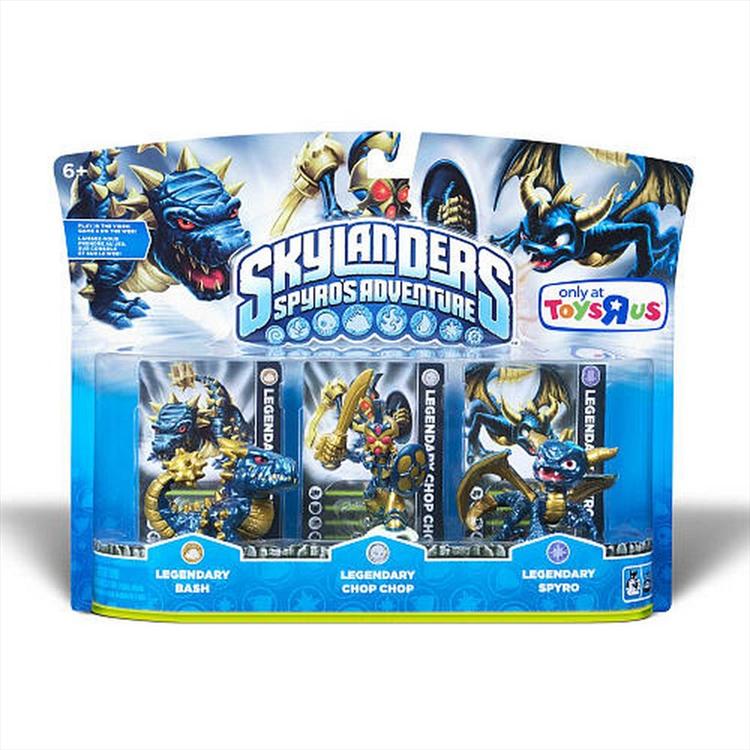 The Skylanders Spyro's Adventure Legendary Triple Pack is exclusive to Toys "R" Us and features Legendary Bash, Legendary Chop Chop and Legendary Spyro. All three Legendary characters have stat boosts not available to their standard counterparts.

Legendary Bash, of the Earth element, hits the portal with double armor-helpful when kids take him out of the package and place him instantly into more difficult levels.

Legendary Chop Chop, an Undead element character, is ready to slice and dice his foes. He's a good guy to have on your team as his defenses are high and he likes to get up close to enemies to attack with his ancient sword.

Legendary Spyro, a fiesty purple dragon from the Magic element, rounds out the Legendary Triple Pack. He can charge at enemies, knock down obstacles with his horns and can fly-making him one of the more versatile Skylanders characters.