by: Nathaniel - posted: 10/19/2011 12:04:00 PM
More On: Need for Speed: The Run
Along with some other dude who, lets face it, those who buy Need for Speed: The Run just aren't going to care about.  Sam Faris from the Vampire Diaries?  Really, EA?  That is who you deemed "as appealing to female gamers as Christina Hendricks is to male gamers?"  Anyway, Ms. Hendricks (Mad Men's aggressive office manager, Joan) and the Vampire Diaries' Sam Faris (no one really cares who he plays, right?) team up as Sam Harper and Jack Rourke, respectively, in EA's upcoming Need for Speed: The Run.  He is a driver with a price on his head.  She is.....well, it doesn't really say because in EA World, a woman's only role is to look smoking hot in leather pants, apparently.  And judging from the screenshot and trailer below, Sam doesn't even look like Christina Hendricks aside from the red hair and, well, the other thing Ms. Hendricks is known for.  To EA's marketing department, those surly must be the only reasons anyone likes her.  Need for Speed: The Run hits stores on November 15th.  For full details instead of snarky commentary, follow the jump. 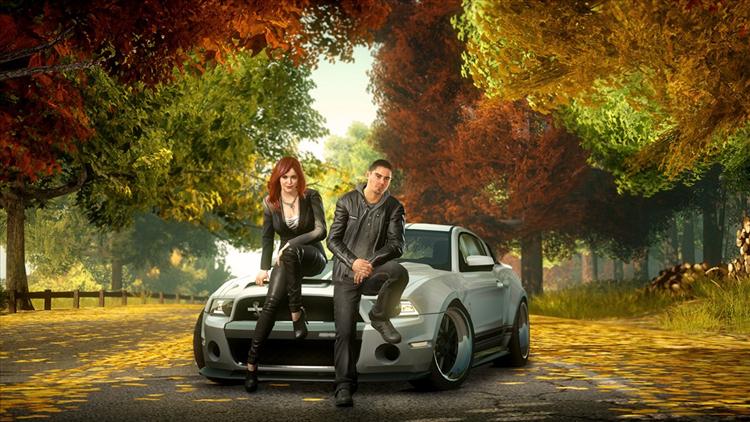 REDWOOD SHORES, Calif. – October 18, 2011 – Electronic Arts Inc. (NASDAQ: ERTS) today announced that Christina Hendricks (Mad Men) and Sean Faris (Vampire Diaries) will star in the upcoming action racing game Need for Speed™ The Run. The video game will feature the actors as lead characters in an intense race-for-your-life story taking players on a cross-country race from San Francisco to New York. Powered by Frostbite™ 2, Black Box Studio makes its return and takes the action racing genre to new heights with stunning visuals and car physics that hug the road at insanely fast speeds. The game is the action racing blockbuster of the holiday.

“Need for Speed The Run brings unprecedented racing action into an expansive race course which encompasses a coast-to-coast race from the Golden State to the Empire State,” said Jason DeLong, Need for Speed The Run Executive Producer. “Our innovative, all-new performance capture technology pushes the boundaries of character animation allowing us to perfectly capture Christina and Sean’s likeness resulting in an engaging narrative experience coupled with top-notch racing.”

Christina Hendricks, the Emmy and Golden Globe nominated actress who plays the gorgeous, bold and savvy Joan Harris (née Holloway) in the hit AMC drama Mad Men, makes her videogame debut in Need for Speed The Run as Sam Harper: a woman with ambition, street smarts and a penchant for lightning fast cars. She’s turned her lifelong passion into a lucrative livelihood, managing the best drivers in the cutthroat world of outlaw street racing. In this illicit, male-dominated racket, she’s betting on Jack, the story’s protagonist, by fronting his $250K race buy-in in hopes of winning the $25 million prize. It’s Sam that enables Jack to enter the race as she remains his eyes and ears on the course.

“It’s very exciting to be part of Need for Speed The Run. I’ve never been a video game character before so this is definitely a first for me. It’s been fantastic fun to do something so different and to show a different side of myself as well,” said Christina Hendricks.

Sean Faris (The Vampire Diaries, Never Back Down), one of Hollywood’s up-and-coming leading men, gets in the driver’s seat as Jack Rourke in Need for Speed The Run. One of the best drivers around, Jack’s cockiness and arrogance has led him into a debt he can’t repay. The mob has put a price on his head, and it’s a lofty one. He’s looking for a way out and only Sam can help. His only chance of survival is to enter and win the race to New York.

“I’ve definitely done my share of intense action scenes in movies but it’s totally different and thrilling to actually be a character and driver in Need for Speed The Run. I got a kick out of seeing myself in the game, it’s totally me! I’m a huge fan of the Need for Speed series so I jumped at the opportunity to be a part of the game,” said Sean Faris.

Developed by Black Box, an EA studio, Need for Speed The Run will be available November 15, 2011 in North America and November 17, 2011 in Europe for the Xbox 360® videogame and entertainment system, PlayStation®3 computer entertainment system, PC, Wii™ and Nintendo 3DS™. For more information on Need for Speed, visit http://www.needforspeed.com or become a fan on Facebook at http://www.facebook.com/needforspeed and follow us on Twitter http://www.twitter.com/needforspeed.

About Electronic Arts
Electronic Arts (NASDAQ:ERTS) is a global leader in digital interactive entertainment. The Company’s game franchises are offered as both packaged goods products and online services delivered through Internet-connected consoles, personal computers, mobile phones and tablets. EA has more than 100 million registered players and operates in 75 countries.