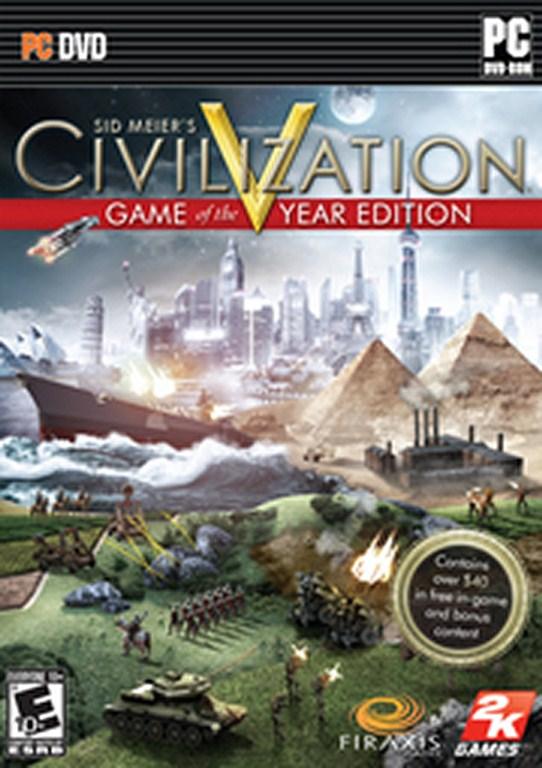 
New York, NY – September 14, 2011 – 2K Games today announced that Sid Meier’s Civilization® V Game of the Year Edition for Windows PC will be available starting September 27, 2011 at retailers and select digital partners across North America. This all-encompassing package contains the award-winning standalone product, along with a wealth of previously released add-on content at a great value price of $49.99.

Developed by Firaxis Games, Sid Meier’s Civilization V was one of the most critically acclaimed PC games of 2010 and earned numerous awards and accolades, including BAFTA (Strategy Game of the Year), GameSpy (PC Game of the Year, Best Strategy Game), VGChartz (Best Strategy Game, Best Original Score, Most Innovative Game) and Electric Playground’s Reviews on the Run (Best PC Game). Now, this heralded title will arrive in a Game of the Year Edition that contains previously released digital content and bonus items in a single package featuring:

Civilization V takes this definitive strategy game series in new directions with the introduction of hexagonal tiles allowing for deeper strategy, more realistic gameplay and stunning organic landscapes for players to explore as they expand their empire. The brand new engine delivers a spectacular visual experience that brings players closer to the Civ world than ever, featuring fully animated leaders interacting with players from a screen-filling diplomatic scene and speaking in their native language for the first time. Wars between empires feel massive, as armies dominate the landscape and combat is more exciting and intense than ever before. The addition of ranged bombardment allows players to fire weapons from behind the front lines, challenging them to develop clever new strategies to guarantee victory on the battlefield. In addition to the new gameplay features debuting in Civilization V,an extensive suite of community, modding and multiplayer elements are also available.

Sid Meier’sCivilization V Game of the Year Edition is rated E10+ (Everyone 10 and older) by the ESRB and will be available on the PC on September 27, 2011 in North America for $49.99. For more information please visit www.civilization5.com.

Microsoft, Windows, Xbox, Xbox 360, Xbox LIVE, and the Xbox logos are trademarks of the Microsoft group of companies and are used under license from Microsoft.

All trademarks and copyrights contained herein are the property of their respective holders.

The statements contained herein which are not historical facts are considered forward-looking statements under federal securities laws and may be identified by words such as "anticipates," "believes," "estimates," "expects," "intends," "plans," "potential," "predicts," "projects," "seeks," "will," or words of similar meaning and include, but are not limited to, statements regarding the outlook for the Company's future business and financial performance. Such forward-looking statements are based on the current beliefs of our management as well as assumptions made by and information currently available to them, which are subject to inherent uncertainties, risks and changes in circumstances that are difficult to predict. Actual outcomes and results may vary materially from these forward-looking statements based on a variety of risks and uncertainties including: our dependence on key management and product development personnel, our dependence on our Grand Theft Auto products and our ability to develop other hit titles for current generation platforms, the timely release and significant market acceptance of our games, the ability to maintain acceptable pricing levels on our games, our ability to raise capital if needed and risks associated with international operations. Other important factors and information are contained in the Company's Annual Report on Form 10-K for the fiscal year ended March 31, 2011, in the section entitled "Risk Factors," and the Company's other periodic filings with the SEC, which can be accessed at www.take2games.com. All forward-looking statements are qualified by these cautionary statements and apply only as of the date they are made. The Company undertakes no obligation to update any forward-looking statement, whether as a result of new information, future events or otherwise.