by: Sean Colleli - posted: 4/13/2011 8:54:00 PM
More On: Disgaea 4
If you're a fan of the niche JRPG Disgaea series, it'll probably be hard to pass up the preorder goodies for the upcoming Disgaea 4 for the PS3. Not only does it come in a limited edition box but that box happens to include an artbook and an exclusive figurine of Fuka, one of the game's main characters. Artbooks are pretty standard preorder bonus fare, but action figures? That's something special. Man, I wish Nintendo cared as much about its diehard fans to put action figures in their games. 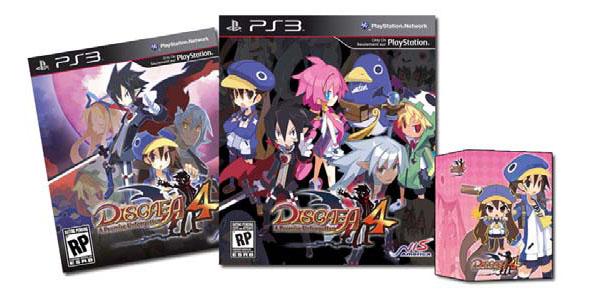 Santa Ana, Calif. (April 12, 2011)–NIS America announced today the details for Disgaea4’s Premium Edition for the PlayStation®3! The Premium Edition of Disgaea4 will be available at Gamestop and other retailers in September, 2011.
The Premium Edition package will contain Disgaea4 for the PS3 in a collectible game box along with a full-color, beautifully illustrated softcover art book. The collectible art book contains detailed character profiles, concept art renditions of the characters, and story information. Also included in the Premium Package will be an exclusive figurine of Fuka, one of Disgaea4's main characters!

About Disgaea®4
This latest incarnation of the popular Disgaea strategy RPG series boasts major graphical improvements, Disgaea'smost in-depth gameplay yet, everlasting value, and the great sense of humor you've come to love. The new graphics engine truly brings TakehitoHarada's characters to life with fluid animations and high definition details. Create your own political party and take advantage of a slew of new battle and strategic features expanding upon the already staggering replay value. Finally, Disgaea 4 adopts an all new map-generating mode, enabling players to create and share custom maps with fans around the world! You can even design your own pirate ship to attack them with! This summer, Disgaea 4 will relentlessly invade your gaming room!