2K Games finally gets around to building The Darkness II

by: Chuck - posted: 2/8/2011 7:10:00 AM
More On: The Darkness II
A lot of people forget how good of a game The Darkness was, mostly because it shipped the same year that 2K shipped another colorful FPS game that rhymes with Diodock.  Sure it didn't have Andrew Ryan but then again the game didn't tail off during the last third of the game.

Anyway, 2K Games announced today that they have brought Digital Extremes in to work on The Darkness II which will be released for the Xbox 360, PS3, and PC in fall 2011.  The game will feature "Quad wielding" which means you can have two weapons in your hands while your demonic tentacles are free to play with things in the environment.

The only concern I have is that Starbreeze isn't doing the game as they excel at these atmospheric shooters (they did the original game plus other games like The Chronicles of Riddick). The game does add to an already FPS heavy portfolio of 2011 games for 2K as it joins Spec Ops: The Line, Duke Nukem Forever, and X-Com.  Not a bad thing necessarily but just wanted to point it out. 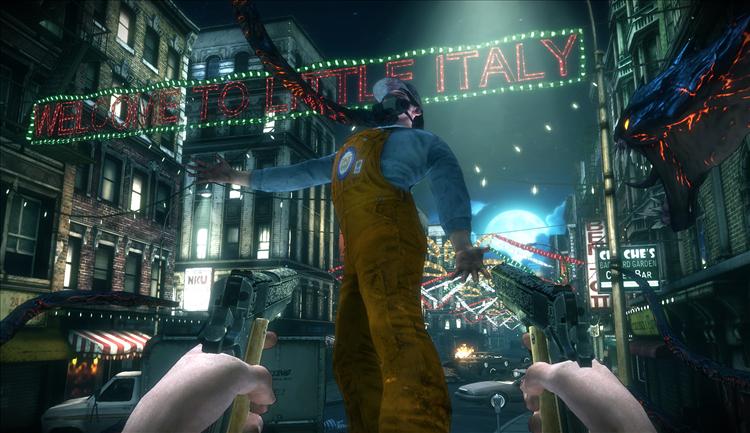 
New York, NY – February 8, 2011 – 2K Games announced today that The Darkness™ II, the sequel to the million unit-selling 2007 title, The Darkness™, will be coming to the Xbox 360® video game and entertainment system from Microsoft, PlayStation®3 computer entertainment system and Windows PC in fall 2011. Developed by Digital Extremes and based on the supernatural horror comic book series created by Top Cow Productions, Inc., The Darkness II takes players down a brutal and personal path as Jackie Estacado, wielder of The Darkness – an ancient and ruthless force of chaos and destruction.

The Darkness II breaks out of the sea of conventional first-person shooters with its fervid Quad-Wielding gameplay, which will allow players to slash, grab, and throw objects and enemies with their Demon Arms while simultaneously firing two weapons. The game is layered with the use of dark versus light, steeped in deep and twisted storytelling, and engulfed in stylistic violence that is visualized through a hand-painted graphic noir technique that stays true to its comic book origins.

“The Darkness II is a well of dark and imaginative violence, and it’s a stylized and beautiful nightmare,” said Christoph Hartmann, president of 2K. “The Darkness II continues the 2K Games tradition of delivering quality, innovative games that are filled to the brim with atmosphere and deep storytelling. The game takes a unique stance on fighting in the dark versus light. Combined with the arsenal of weapons at Jackie’s disposal and the gruesome attacks of the supernatural Demon Arms and Darkness powers, we’re proud to announce another title that delivers on our core values of creating games for gamers.”

Take a step back from the familiar and comfortable, and prepare to embrace The Darkness.

It’s been two years since Jackie Estacado, now the Don of the Franchetti crime family, used The Darkness to kill the men responsible for his girlfriend’s murder. He’s been unable to shake the memory of Jenny’s death since bottling up his supernatural power, and now The Darkness wants out. A sudden, unprovoked attack on Jackie’s life heralds the start of a full-scale mob war, which has clearly been orchestrated by some outside force. The botched attempt opens the door for The Darkness to reemerge, and sets Jackie on a journey to hell and worse, as he unravels the mystery behind the attack and the motivations of The Darkness itself.

“Sometimes that whooshing sound you hear is that of comic fans holding their collective breath,” said Marc Silvestri, founder and CEO of Top Cow Productions and co-creator of The Darkness comics. “So often disappointed when a favorite character gives birth to a lame movie or video game, us fans have come to expect the worst. And sometimes we get it. But not with The Darkness II. Yeah, call me biased, but this second installment of Jackie Estacado’s epic saga is – in my humble opinion – one of the most brutally cool games I’ve ever played. 2K Games hammered this one out of the park.”

Founded in 1993 by industry visionary, James Schmalz, Digital Extremes ranks as one of the world’s top independent game development studios. Having worked with some of the top publishers in the videogame industry including 2K Games, THQ, Electronic Arts and Atari, Digital Extremes is best known for its co-creation of the award-winning and multi-million unit selling franchise, Epic Games’ Unreal®, its work on 2K Games’ BioShock franchise as well as its own original title, Dark Sector® for Playstation®3 and Xbox360® using their proprietary technology, the Evolution Engine™. For its creativity and innovation in the workplace, Digital Extremes has been named as one of Canada’s top 100 employers by Maclean’s magazine for the past two years. For more information about the company or licensing the Evolution Engine, please visit www.digitalextremes.com.

All trademarks and copyrights contained herein are the property of their respective holders.

The statements contained herein which are not historical facts are considered forward-looking statements under federal securities laws and may be identified by words such as "anticipates," "believes," "estimates," "expects," "intends," "plans," "potential," "predicts," "projects," "seeks," "will," or words of similar meaning and include, but are not limited to, statements regarding the outlook for the Company's future business and financial performance. Such forward-looking statements are based on the current beliefs of our management as well as assumptions made by and information currently available to them, which are subject to inherent uncertainties, risks and changes in circumstances that are difficult to predict. Actual outcomes and results may vary materially from these forward-looking statements based on a variety of risks and uncertainties including: our dependence on key management and product development personnel, our dependence on our Grand Theft Auto products and our ability to develop other hit titles for current generation platforms, the timely release and significant market acceptance of our games, the ability to maintain acceptable pricing levels on our games, our ability to raise capital if needed and risks associated with international operations. Other important factors and information are contained in the Company's Transition Report on Form 10-KT for the five month transition period ended March 31, 2010, in the section entitled "Risk Factors," and the Company's other periodic filings with the SEC, which can be accessed at www.take2games.com. All forward-looking statements are qualified by these cautionary statements and apply only as of the date they are made. The Company undertakes no obligation to update any forward-looking statement, whether as a result of new information, future events or otherwise.