by: Chad - posted: 8/17/2010 9:33:00 AM
More On: Gog.com
Anyone that was holding out from buying a game on GOG can finally give in today.  GOG has released Total Annihilation on their service for only $5.99.  It's actually the "Commander Pack" which includes the original game plus two expansions, The Core Contingency and Battle Tactics.

I would write more but I'm finding a way to get "sick" and leave work.  What fond memories I have of this RTS game... 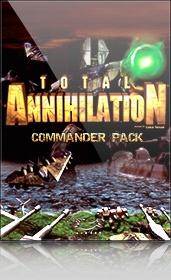 Aug 17, 2010
Today's release is a true icon among RTS games. Among other things, it won GameSpy's Top Ten RTS Games of All Time award in 2004, leaving other, more popular titles crawling in its wake.

Total Annihilation is a real-time strategy game released in 1997. Even though it never got any official sequels, the fact that it's still being actively played after over a decade speaks for itself. It plays quite differently than a regular RTS, especially in terms of resource management and production mechanics. It's more like finding the perfect balance than just gathering and spending as you go along. Combat itself is just massive, with each side being able to field a thousand units, a feature that was left unchallenged for many years. Finally, our release comes complete with both official expansions: The Core Contingency and Battle Tactics. So, are you ready to witness RTS perfection?