by: Dan - posted: 8/13/2010 12:53:00 PM
More On: Halo: Reach
Contests and gaming go together like peanut butter and jelly. The latest contest announced will be Mountain Dew and Doritos teaming up to offer exclusive Xbox 360 prizes for the Halo: Reach launch starting on September 5th. Anyone interested should head to the Mountain Dew Facebook page.  Heck, I won my first Xbox 360 through the EveryTenMinutes.com promo Mountain Dew ran back in 2005.

In addition, Mountain Dew is giving away 10 Mountain Dew/Halo: Reach Xbox 360s open until September 19th for those that subscribe to the Mountain Dew Dewsletter found at Mountaindew.com. 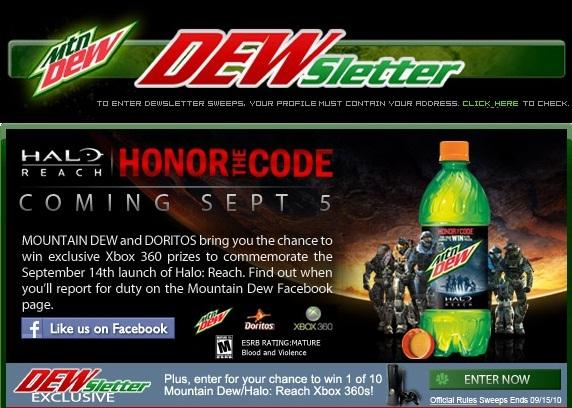