by: Jeremy - posted: 6/16/2010 2:57:00 PM
More On: E3 2010 Mortal Kombat Mortal Kombat Rebirth
John posted the trailer for the new Mortal Kombat game last week and the game is being shown by Warner Bros. and Netherrealm Studios at E3. Bits and pieces of information about the game are slowly starting to leak out from those in attendance... particularly about the story.

Supposedly (still waiting on some official news), the game takes place “immediately” following the conclusion of Armageddon (the game, and the quotation marks will make sense shortly). At that point in time, Raiden and Shao Kahn are the only two beings remaining and Shao Kahn is on the verge of killing Raiden. Raiden manages to somehow, and this is where is gets strange, send a subconsious message to his original self back at the time of the original Mortal Kombat tournament (game). He tells his former self that he needs to change the future in order to ensure that Armageddon doesn’t happen. The game starts at that point and follows a “retelling” of the events of the first three games, though changes occur which alter the storyline(s) as we know them due to Raiden’s intentions.

Make sense? I am still a little fuzzy on it, but it is starting to come clear to me. The game is playable at the event (see the selection screen shot below) with 8 playable characters. The final version is said to include close to 30 characters, which a majority of them being familiar to players of the previous games. “Familiar” may only apply in name though, as they may be different depending on how the course of (MK) history has changed in the storyline. For example, Smoke may never become a robot and perhaps Cyrax was never mechanized.

Hopefully we can get a ton more, official information on the game before the week is out. I know that John was looking forward to checking out the game personally at the conference, and let’s hope for clarity’s sake that he does. 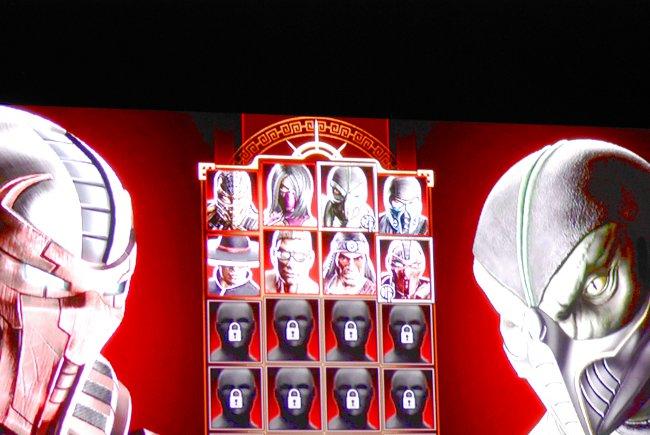