by: Chad - posted: 5/18/2010 9:55:00 PM
More On: Gog.com
GOG has reached an agreement with Frogwares, an independent studio that specializes in adventure gameS.  The first title to be released on GOG is Sherlock Holmes: Secret of the Silver Earring.  Murder, mystery and clue finding abound in this DRM-free title.  Find out more here where you can also purchase it for $9.99 starting today. 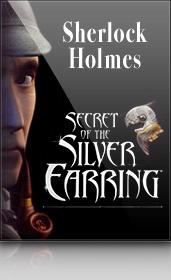 Sherlock Holmes to Solve the Mystery of DRM-Free Games on GOG.com
Adventure games based on the exploits of Sherlock Holmes and Jules Verne's prose make their way to the DRM-free distribution platform.

Warsaw, Poland – May 18, 2010. GOG.com (http://www.gog.com), the digital distribution service with that nostalgic feeling you can only get from good, old games, has secured another deal to breathe new life into more titles from PC-gaming history. The agreement with development studio, Frogwares, will bring to GOG.com adventure games full of… well… adventure! Coinciding with the announcement, the first game has been released – Sherlock Holmes™: Secret of the Silver Earring. As with all GOG.com releases, the game is DRM-free and comes with additional materials.

Sherlock Holmes™: Secret of the Silver Earring, places players in the boots of one of the most brilliant and intelligent detectives ever to grace the computer screen. Together with his trusted friend Dr. Watson, Sherlock Holmes is invited to a party hosted by Sir Melvyn Bromsby in honor of the return of his daughter, Lavinia. During his opening remarks Mr. Bromsby is killed by a gunshot in front of Sherlock's very own eyes. But that's only the beginning. As Sherlock and Watson, players need to interrogate all of the witnesses and suspects, analyze discovered items and use their talents of deduction to piece together the clues and find out who is the killer.

“GOG has been showing a lot of interest in adventure titles and are dedicated to the adventure players community,” said Wael Amr, Frogwares CEO. “We're very happy about the cooperation with GOG. Releasing Sherlock Holmes™: Secret of The Silver Earring first seems as the best choice for GOG users - after seducing half million players around the world, the game certainly became a classic title for digital detectives.”

Sherlock Holmes™: Secret of the Silver Earring is available from today, Tuesday May 18, for $9.99. The second release from Frogwares - Journey to the Center of the Earth - will be available soon for the same price.

About Frogwares
Created in 2000, Frogwares is an independent development studio specialized in adventure video games. Thanks to a talented team of 45 artistes and programmers, studio has released quality games to please adventure fans. The company has alternate the production of games based upon inquiry and discovery, with high licenses like Sherlock Holmes and Jules Verne. The graphic quality, the technical innovation and the incredible ability to create environments and atmospheres are the spearheads of the studio's titles.
http://www.frogwares.com

About GOG.com
GOG.com – or Good Old Games – is the ultimate destination for classic PC games. The site offers gamers some of the greatest PC games of all time for a low price and free from copy protection. GOG.com is much more than just another digital distribution site, featuring an extensive community component that allows players to rate, review and discuss their favourite PC games, as well as insightful articles from respected games journalists. Visit www.gog.com and start your journey to the past.