Disney to Sing It to Families

by: Dan - posted: 5/3/2010 3:10:00 PM
More On: Sing It: Family Hits
Disney Interactive Studios announced today that they were expanding their Sing It series to include all of the family. Disney Sing It: Family Hits is slated for a Summer 2010 release on the Wii and PlayStation 3 only. I am wondering if Microsoft declined due to their Lips franchise, or if DIS decided to not put it out for the 250. Regardless, families will be able to sing songs from many of the original animated classics like Cinderella, Sleeping Beauty, The Lion King, Aladdin and more. Check out the release after the jump for all the game details as well as some additional films that will be on the disc. 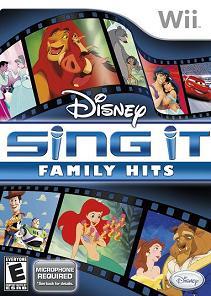 DISNEY INTERACTIVE STUDIOS WILL GET FAMILIES SINGING TOGETHER IN DISNEY SING IT: FAMILY HITS

BURBANK, Calif. - (May 3, 2010) - Nothing brings together families like the magic and music of Disney's films, and today Disney Interactive Studios announced a new interactive way for families to come together and enjoy their favorite songs from their favorites films. Disney Sing It: Family Hits is a karaoke game featuring the most beloved songs and videos from 20 all-time favorite Disney films, alongside vocal tips from the Princess and the Frog's Anika Noni Rose. Disney Sing It: Family Hits will be available for the PlayStation®3 system and the WiiTM console in summer 2010.

Tapping into both the past and the present, Disney Sing It: Family Hits features favorite songs from all-time classic Disney films, including Cinderella, Sleeping Beauty, Mary Poppins and The Jungle Book, as well as contemporary favorites from films like Disney•Pixar's Toy Story and Cars, The Lion King, Aladdin, The Little Mermaid, The Princess and The Frog, and more. Further immersing players in the moment, the easy to follow karaoke gameplay is accompanied by full screen HD videos featuring montages, as well as original footage from each of the Disney movies.

"The Disney Sing It franchise has produced a passionate fan base, and they've expressed a big demand for songs from Disney's timeless movies," said Craig Relyea, senior vice president of global marketing, Disney Interactive Studios. "Now, music fans of all ages will be able to enjoy Disney Sing It: Family Hits, both as an engaging karaoke performance game as well as perfect entertainment for family fun."

In Disney Sing It: Family Hits, players will use the pitch bar to assist in hitting the right notes and can sing solo, partner up for a duet, compete head-to head, or pass the microphone around to up to 8 players in the Family Mode. To relive key moments, the Sing It Encore Mode enables players to play back their performances and add fun effects to customize their tunes.

To assist players in improving their performances and unlocking awards and Disney themes, the Tony award winning singer/actress Anika Noni Rose, who also voiced Princess Tiana in The Princess and the Frog, provides vocal exercises and techniques. Anika takes players through a series of basic voice instructions, game tutorials and singing games that are designed to help all players become better singers and performers. Lessons include proper microphone technique, how to hit high and low, long and short, and fast and slow notes, among other tips, providing a valuable learning tool for players of all ages.

Disney Sing It: Family Hits from Disney Interactive Studios is Rated E for everyone by the Entertainment Software Rating Board (ESRB).