Patch being applied to EVE Online

by: Chad - posted: 1/21/2010 3:03:00 PM
More On: EVE Online
The "world's largest game universe" is getting a large update today.  EVE Online: Dominion 1.1 will be available today after an extended downtime.  Among some of the things changed:
The full list of changes for EVE Online can be found here.  You can also read (click here) a developer blog that focuses on the new Supercarriers and fighter bombers (pictured below).  Enjoy, Pilots! 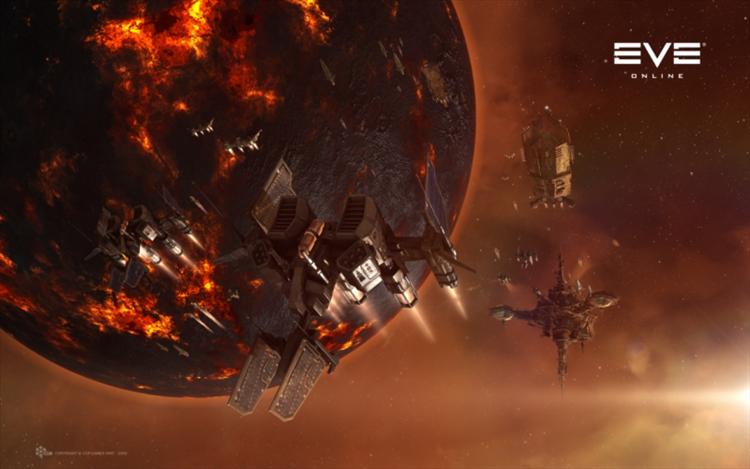 Greetings from CCP,
EVE Online: Dominion 1.1 will be available for free today to players after an extended downtime.

All Mothership-class vessels in New Eden have gone back to the shipyards to emerge as Supercarriers--redesigned behemoths of the frontlines of battle. At their command are the new and deadly fighter bombers, anti-capital scourges that fire compact citadel torpedoes against their targets and bring another level of strategy to the battlefields of EVE’s much-touted player conflicts.
A developer blog on the subject, which includes a screenshot of the Minmatar fighter bombers, can be found here: http://www.eveonline.com/devblog.asp?a=blog&bid=725

EVE’s roleplayers, saboteurs and people-who-wish-to-remain anonymous receive a fun tool in the addition of Voicefonts to EVE Voice, which allows for real time modulation of voice chat in the built in-EVE Voice tool for fleets. It allows you to raise or lower your voice, alter its quality and even switch genders to match your avatar! Undoubtedly there will be humorous and nefarious stories to come once EVE’s notoriously inventive pilots start fully exploring it.

In addition, Dominion 1.1 will bring a whole host of fixes and alterations, UI improvements and ship balances (especially in capital ships). A full list of patch notes can be found at http://www.eveonline.com/updates/patchnotes.asp?patchlogID=202

MORE EVE NEWS…
2010 couldn’t be going better for EVE.
We’ve grown about 10% in about the past month, following on the improvements set by EVE Online: Dominion. In fact, we have about ten-thousand more pilots currently in EVE than are in the entire country of Iceland, the land of fire and ice where CCP is headquartered. It had been a standing internal goal and we’re proud to reach it.

Therefore, in the first few weeks of 2010, we’ve broken our PCU (Peak Concurrent User) record twice. It now stands at a staggering 56,021. In addition, we’ve been able to sustain an impressive 1,400 pilots in the Jita system, one of the main market hubs of the game, thanks to a lot of work from our virtual worlds and programming teams.

Awards, we has them! Some great honors have headed EVE’s way in the past month.

PC Gamer magazine put EVE Online at #57 of their Best Games of All Time list in a recent issue, a true honor as every other game on that list has been played and loved by nearly every CCP employee during their gaming careers.

MMORPG.com proclaimed us Game of the Year for 2009. Not bad for a game that’s been around since 2003.

TenTonHammer awarded our pilots the Best Community Award, which we believe is a true measure of the MMO industry. After all, they provide the MM. In EVE’s sandbox, that’s nearly the whole of the gaming experience.

Speaking of which, MMORPGItalia just announced us as Best Sandbox of 2009, a testament to EVE’s original game design and staying power.