A look at NBA Jam

by: John - posted: 1/18/2010 5:00:00 AM
More On: NBA Jam
The announcement was a week ago but a scan of Nintendo Power from Go Nintendo shows what EA's NBA Jam is going to look like. Real photos for the head and 3D bodies makes for an interesting combination. The picture has the Boston Celtics with Paul Pierce and Kevin Garnett up against the Cleveland Cavaliers with LeBron James and Shaquille O'neal. The one screenshot, while having a new look, is reminiscent of the old school arcade game. Can't wait to try it out at E3 as I'm guessing that's when we'll be able to get some hands on time with it. 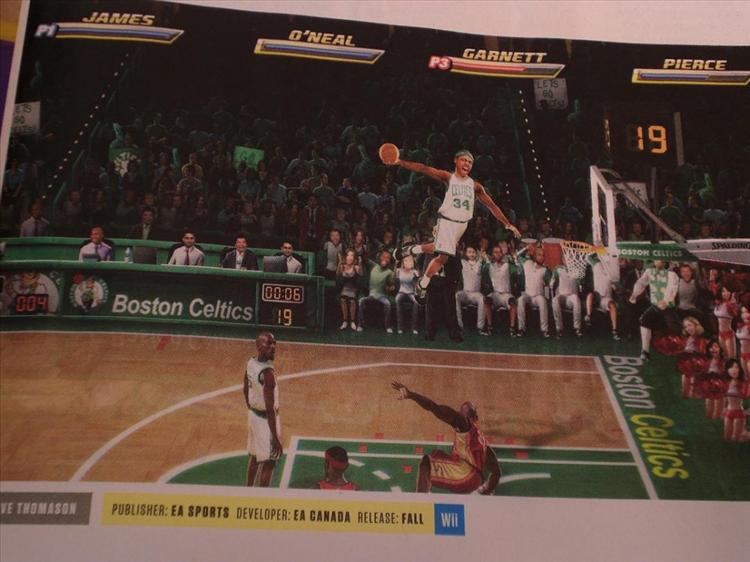 REDWOOD CITY, Calif.--(BUSINESS WIRE)--Electronic Arts Inc. (Nasdaq: ERTS) announced today that EA SPORTS™ is developing one of the most popular and culturally influential arcade basketball games ever made -- NBA JAM -- for the Nintendo Wii™. EA SPORTS NBA JAM™ revives the classic franchise with vintage NBA JAM gameplay, and all-new features that deliver a fresh new take on the game. Featuring the sights and sounds that fans of the franchise will instantly recognize, EA SPORTS NBA JAM mixes the old school with the new, to deliver a one-of-a-kind sports presentation on the Wii.

“NBA JAM is one of the most recognizable franchises in videogame history,” said Peter Moore, President, EA SPORTS. “Diehard fans of the original game have been asking for a remake for more than a decade. We’re very excited to give them their wish this year with the return of this iconic franchise.”

Featuring gameplay that is true to the original, NBA JAM will have players spinning with ankle breaking moves to the basket and on the way to high-flying, backboard-smashing dunks. In addition to the classic experience, EA SPORTS NBA JAM will also introduce new game modes, characters and gameplay depth.

NBA JAM brought an all-new visual style to the sports videogame genre when it debuted in 1993. Now, the new EA SPORTS NBA JAM re-defines the visuals for a sports game yet again by bringing true-to-life body types, updated physics and visible player emotion to the over- the - top experience.

EA SPORTS NBA JAM is currently in development at EA Canada in Vancouver, BC and will be available for the Nintendo Wii videogame system in 2010. The game has not yet been rated by the ESRB or PEGI.