by: Chuck - posted: 12/16/2009 2:18:00 PM
More On: Sony PSP PLAYSTATION 3 PSP Playstation Network PSP Go
Sony has launched a new service that will allow you to buy and view digital comic books on your PSP.  The service will allow you to purchase select comics from Marvel, DC, iVerse, and a other publishers.  Comics you can either be purchased directly from your PSP over WiFi or using a PC with Media Go.

The service is launching with over 550 comics and I'm guessing there will be a new batch released every week.   The comics will range in price from .99 to $2.99 with a few freebies tossed in here and there.  To use the service you'll need to have the 6.2 version of the PSP firmware.

I'm interested to see if this takes off or not.  It doesn't really seem like a killer app for the PSP that will move a lot of hardware but it is something that I think a lot of people will dig if the comic viewer is solid.  Hopefully you'll be able to buy subscriptions to comics so you can get a bit of a discount on your regular reads. 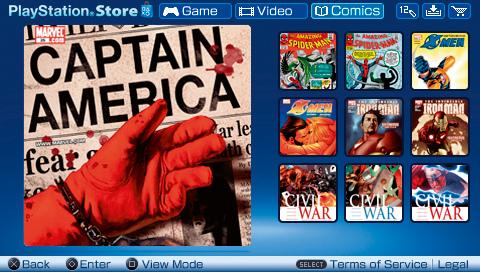 ony Computer Entertainment America (SCEA) today announced that PSP (PlayStation®Portable) system owners in the United States can now purchase and enjoy hundreds of classic and new comics from a variety of leading publishers, including Marvel Entertainment, Disney, IDW Publishing, iVerse Media and others.
The new PlayStation®Network Digital Comics service puts favorite comic book characters and popular franchises at consumers’ fingertips, when and where they want them. PSP owners can check out Marvel Entertainment’s G.I. Joe, Iron Man, Spider-Man, X-Men and the Fantastic Four; TRANSFORMERS and Star Trek from IDW; and, in partnership with iVerse Media, brands like Archie Comics, and Image Comic's Proof.

Digital comics purchased from PlayStation Store are easy to view and enjoy on PSP. The Digital Comics Reader application, currently available with PSP firmware update (v6.20), enables PSP users to feel like they are browsing through a print comic book right in the palm of their hand. Due to an exclusive Autoflow feature, consumers can flip from page-to-page, zoom in and move from frame-to-frame on each digital page -- similar to the way eyes move across a print page from left to right. Comics are graphically stunning due PSP’s high contrast LCD screen.

The majority of comics can be purchased for $1.99, with select comics available at $0.99 and $2.99. The PlayStation Store also features a variety of free comics for everyone to enjoy, including Disney’s Donald Duck and the Fussy Genie, and Marvel’s Transformers All Hail Megatron.

Consumers can find out more information about PlayStation Network Digital Comics at www.playstationcomics.com and http://blog.us.playstation.com/2009/12/psn-digital-comics-launch-today/.