The application is free to everyone who has an iPhone/iTouch and allows you to check your weapon preference in the game, check out your stats, check out what your friends are doing, and get news about things that are going on in the world of the game. 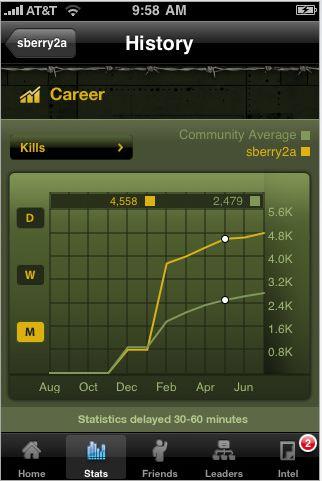 Call of Duty: World at War

Santa Monica, CA – August 4, 2009 – Marking a first for the Call of Duty® franchise and its millions of dedicated fans, Activision Publishing, Inc. (Nasdaq: ATVI) and Call of Duty®: World at War developer Treyarch, announced today that it has launched its first iPhone™ application as a companion for the blockbuster game. Available for free via iTunes™, the Call of Duty: World at War Companion allows fans who own iPhones to remotely access important news and updates from the palms of their hands. Additionally, players with linked accounts on www.CoDWaW.com (for the Xbox 360™ video game and entertainment system from Microsoft and the PLAYSTATION®3 computer entertainment system from Sony) will be able to see key stats from the game. The application will support unique registered player accounts for Call of Duty: World at War fans by providing:

§ Performance Tracking: Gain quick access to all of your weapon usage.

§ Link with Friends: Monitor online activity, and the stats of friends with linked accounts on www.codwaw.com to compare progress.

The Call of Duty: World at War iPhone application is being supported via a robust website (www.CoDWaW.com), providing a new leader boards homepage, new missions, as well as access to global stats.

According to The NPD Group, Charttrack and Gfk, Call of Duty: World at War has sold more than 11 million units to date worldwide across all platforms. Additionally, Treyarch’s first two downloadable map packs have surpassed more than 4.75 million paid downloads on both Xbox LIVE and the PlayStation Network (combined), with a third map pack scheduled to launch on August 6.

Activision maintains operations in the U.S., Canada, the United Kingdom, France, Germany, Ireland, Italy, Sweden, Spain, the Netherlands and Australia. More information about Activision and its products can be found on the company’s website, www.activision.com.