Be wary of the “New” Circuit City’s so called deals

by: Dan - posted: 7/10/2009 6:19:00 PM
More On: PLAYSTATION 3 Circuit City
Back in May, I noted that Circuit City was brought back to life by Systemax (parent company of TigerDirect and CompUSA) and I speculated that the company should be reputable and be good to go. However, today I received an e-mail from Circuit City touting 50 deals up to 50% off. So of course I checked out the list and found a pretty glaring attempt to fleece the general public. The very last thing listed was the PlayStation 3 basic 80GB system touted as a 450 savings at $399. Hmmm, if memory serves me correctly the 80GB PS3 has been selling at $399 for awhile now, not the $449.99 original price that Circuit City has it marked down from.

What makes this even more pathetic is that Best Buy is running the 80GB system with both Metal Gear Solid 4: Guns of the Patriots and Killzone 2 included for the same $399 price. So basically, I’m saying to be careful with the “new” Circuit City, as they look to be pulling some of the same shenanigans that many online retailers have been known to do so you think you are getting a deal. 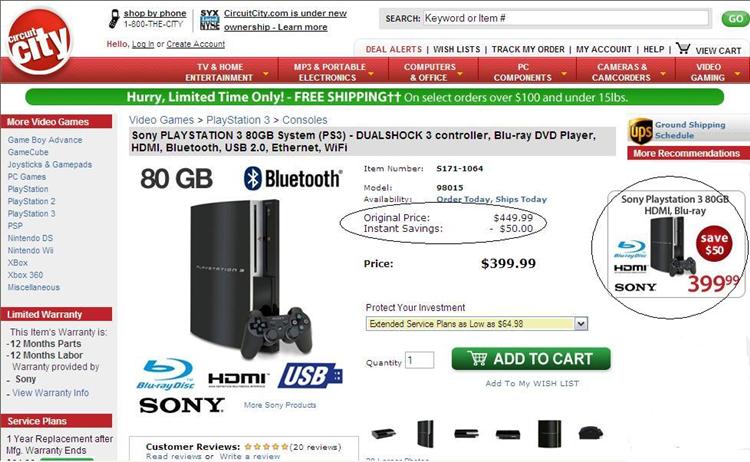