by: Dan - posted: 6/17/2009 5:57:00 PM
More On: BioShock
For those that were gaming under a rock the last few years (or maybe just sold or gave your games away), you now have an opportunity to pick up a couple of gems at a great price. 2K Games and Bethesda Softworks announced today that starting on July 7th, 2006 Game of the Year The Elder Scrolls IV: Oblivion and 2007 Game of the Year BioShock will be sold as a two-pack for both the Xbox 360 ($39.99) and Windows PC ($29.99). Conspicuously absent are a PS3 version and info on what, if any amounts of DLC will be included with either game. 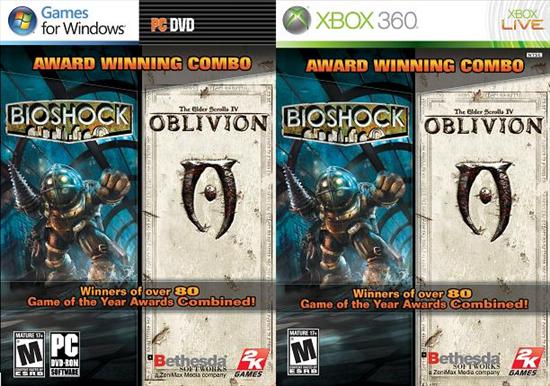 June 17, 2009 – 2K Games and Bethesda Softworks are teaming up to deliver a value-packed experience that combines 2006 Game of the Year Winner The Elder Scrolls IV: Oblivion with 2007 Game of the Year Winner BioShock into one complete package. Beginning July 7, the BioShock & The Elder Scrolls IV: Oblivion Bundle will be available in retailers across North America for an SRP of $39.99 on the Xbox 360® video game and entertainment system from Microsoft and $29.99 for Windows PCs.

With a combined bounty of more than 80 Game of the Year awards from the industry’s top publications, the BioShock & The Elder Scrolls IV: Oblivion Bundle provide two critically acclaimed experiences that have set new benchmarks for their genres.

Taking the world by storm in 2006, Oblivion set a new benchmark for role-playing experiences for current-generation gaming. Lush visuals, expansive worlds and limitless character customization combine with unprecedented levels of player freedom and NPC interaction to form one of the most successful and critically acclaimed games ever created.

BioShock is the genetically enhanced shooter that weaved intricate storytelling with an intense and exciting journey though a decaying underwater Art Deco utopia gone mad. Caught between powerful forces and hunted down by mutated citizens, you are armed with a complete arsenal from simple revolvers to chemical throwers, but are also forced to genetically modify your DNA to create an even more deadly weapon: you.