Question of the week: From critic to creator

by: Randy - posted: 3/27/2009 1:00:00 AM
More On: What we're playing
There are times when video game critics have batted for the other team, moving over to the development side of the house.  As two examples, Jeff Green--former Editor in Chief of Games for Windows magazine--went to EA to work with the SimAnimals team; and Shawn Elliot--a senior editor from the same now-defunct pub--is at 2K Boston Irrational Games (soon again) sipping tea with Ken Levine and probably coming up with off-beat advice for him like, "Dude, Ken, drop the 'Sea of Dreams' subtitle.  But then bring it back."
If you had to give up your beloved position as a video game critic--and your only option was to join a video game development house--what company would you move to, what position would you accept, and what project would you work on?

Sean Colleli:  I'm in the same boat as Tyler, having no hard development skills like programming, modeling or animating. Still, I'd love to write game stories if given the chance because a game's plot can be very dynamic.  With multiple paths and endings, different perspectives on two sides of a conflict and the potential for deeper character development than in a movie, writing the script for a game would really challenge my writing abilities.  As for developers I'd like to work for, my first choice is Factor 5 but unfortunately they've probably bit the dust.  Retro Studios would be a dream come true, especially if they do any more Metroid games.  I'm a huge Metroid fan so it would be great to shape the course of that series.  (Now playing MadWorld, replaying Deadly Creatures)

Adam Dodd:  I'm working on a degree in video game design, so I like this question.  On most days I would say Valve, Blizzard, or Team ICO, because it would be amazing to work as a Game Designer alongside the creative geniuses that made games like Half-Life, StarCraft, and Shadow of the Colossus.  Unfortunately I'll have to temporarily push those dreams aside so I could help Capcom.  Resident Evil 5's a great game and all, but I feel Capcom has lost sight of what Resident Evil is all about, once the premier survival horror franchise - now just another coop action game with sub-standard controls.  So if I could I'd choose to try and help get them back on track with Resident Evil 6.  (Now playing Left 4 Dead and...Resident Evil 5)

Charles Husemann:  As someone who actually codes for a living (although not very well) I'd love to have a producer job with Valve to see where they are taking their various franchises and for the chance to deal with some of the cool stuff they are doing with Steam and Steamworks.  It also wouldn't be too bad to work for Microsoft or Sony in their evangelist departments where they go out and work with a wide variety of developers to help them build their games and better use the features that their respective consoles provide.  (Now playing Peggle, Warhammer 40,000 Dawn of War II, Chronicles of Riddick: Assault on Dark Athena)

Randy Kalista:  I'm utterly stunned by the work put forth by Tale of Tales.  With The Graveyard, they made the possibility of a single death a thoughtful rumination on a life romantically lived.  And with The Path, they dispatched Little Red Riding Hood out into a forest webbed with domesticity issues...and...other strange things.  For a title like "The Path" it sure goes "off the beaten," and that approach appears woven into Tale of Tales' mission statement.  It's out of sheer principle they refuse to make games that are readily categorized or even recognized by the gaming community at large.  That is the company I want to write for.  I mean, at least let me intern for them and type up the minutes from their brainstorm meetings.  (Now playing Command & Conquer Red Alert 3: Uprising, Sky Babes vs. Fly Boys)

Nathan Murray:  The answer to all three questions is of course: mine. The reason why is because of the type of project I want to do. I've had an idea I've been working on for over a year and it has taken on such a life of its own that it is one of my life goals to see it completed. There are plenty of companies that could take my ideas and turn them into a great game, Square Enix, Bethesda, and Bioware to name the top three (guess what type of game it is), however I would prefer to build my own team from individuals that I pick who I feel would be up to the task of completing the huge project. Of course this is all purely hypothetical and if the game does come to fruition it probably won't be for another 10 years or so.  A more realistic answer would be as a script writer for Insomniac. I would prefer working on a new Resistance game and also their IPs always take place in lore rich and creative worlds that new stories could be told in and they are also a company that isn't afraid to gamble on a new idea.  (Now playing Rock Band 2, Army of Two, Far Cry 2, and soon Star Wars Role Playing game; table top, not the soon-to-be MMO)

Sean Nack:  I would go work for Ubisoft, because not only are they doing cutting-edge military shooters like the Rainbow Six and Ghost Recon series, but also well-crafted and narrative-driven games like Far Cry 2, and unabashedly innovative games like Assassin's Creed. Valve is great for not only working outside the box, but even making whole new boxes; Ubisoft consistently takes the old boxes and makes them seem new again.  (Now playing in the Atlantic.)

Tyler Sager:  Since my "real life" skill-set has essentially nothing to do with computers or software design, it might be a bit of a stretch to get myself fitted into a development house. As a bonus, I have absolutely no artistic talent to speak of. Still, I'd probably like to shoe-horn my way into a smaller developer, maybe Stardock. Perhaps they're looking for a story guy? Or someone to design some new strategy titles, perhaps some electronic board game conversions?  (Now playing Drakensang, de Blob)

John Yan:  From what I've hard and what I've seen, I'd love to go work for Valve. They create quality games and they are all solid titles. I've been a fan since I first saw Half-Life in a small room in Atlanta E3 and see how quickly they have risen to the top of the game. They also don't have a problem of shelving a product if it's not working out the way they think it is i.e. the original Team Fortress 2 concept and then going and doing something that worked out in the end.  (Now playing Left 4 Dead, Fallout 3: The Pitt) 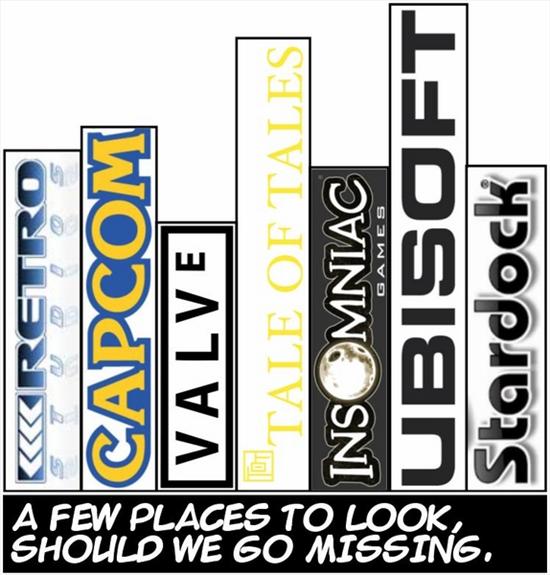