by: Randy - posted: 3/20/2009 12:19:00 AM
More On: Call of Duty: World at War
The video game industry is hard at work every day giving thousands upon thousands of gamers World War II fatigue.  And the industry is--too a limited degree--successful in their efforts.  Just don't tell that to Cyril.  Still, millions of Call of Duty: World at War games have been sold, utterly disproving my infallibly scientific research indicating that WW2 is on the out-and-out, and now World at War sports four new maps in its downloadable Map Pack 1.  One of those maps, Verruckt (Zombie Asylum), is crawling with Nazi Zombies.  Which are, of course, next on the list of themes that video game designers are sworn to wear often and wear thin until they're plumb worn out.  Ah, forget it.  You want zombies?  You get zombies!

Oh.  There are three other maps in the pack, but they don't feature zombies, so you're not interested.  (Sigh:  the "Knee Deep," "Nightfire" and "Station" maps are described after the jump.) 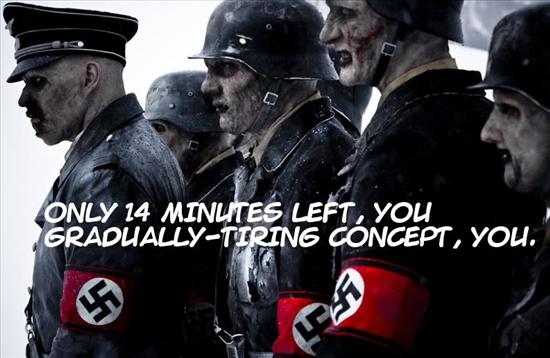 CALL OF DUTY®: WORLD AT WAR

Fire-bombed Berlin provides the backdrop for “Nightfire,” an intense battlefield for mid to large-scale team games. Shelled buildings and ruins of the city provide coverage among the war-ravaged streets, and the flames of the burning city expose the enemy running through the night.  Fight for your life knowing that this fiery urban battlefield may soon be your grave.

”Station” offers a bombed out underground train station littered with destroyed subway cars, hidden passageways, loading platforms and second story overlooks to use to your advantage against any number of enemies. Ideal for dominating Capture the Flag and other team games, this map provides you with a wide range of combat options from close range choke points to hidden sniper spots.

“Knee Deep” takes place on the island of Peleliu in a once tranquil village turned chaotic Japanese command center. You and your squad will fight through the jungle, wading knee-deep in streams, in order to retrieve valuable intel and take battle positions in fortified Japanese bunkers all to secure an important communication center. The harsh jungles of “Knee Deep” are perfect for tactical team games and all-out assaults on multiple enemy positions.

The fan favorite 4-player co-op Nazi Zombies Bonus Mode returns with “Verrückt,” a terrifying Zombie asylum located in the outskirts of Berlin. Players are split into pairs, in the challenge to find each other for survival. Featuring more weapons, and perks via the addition of Perks-a-Cola machines, electroshock defenses and the endless Nazi Zombie horde, “Verrückt” will push you to the edge of your sanity.

Activision maintains operations in the U.S., Canada, the United Kingdom, France, Germany, Ireland, Italy, Sweden, Spain, the Netherlands, Australia, Japan and South Korea.  More information about Activision and its products can be found on the company's website, www.activision.com.