Rockstar hints at the music of GTA: Chinatown Wars and unleashes an asset-palooza

by: Dan - posted: 3/12/2009 9:57:00 AM
More On: Grand Theft Auto: Chinatown Wars
With Grand Theft Auto: Chinatown Wars set to release on the Nintendo DS next week (3/17), Rockstar has been in overdrive getting info about the game to the masses. Within the last few days, information on how the soundtrack will be delivered was released, which will include in-game radio stations called Electro-Choc, IF99, Tuff Gong, The Beat and Radio Broker. The stations music is designed to keep pace with the vibe and action of the game as play gets deeper into the story.

In addition, a whole slew of assets were released including the final box art and 21 screens. Check them all out after the jump: 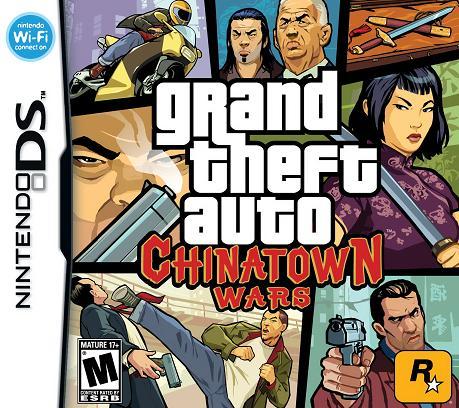 Grand Theft Auto: Chinatown Wars is an en entirely new entry into the series, built from the ground up for the Nintendo DS by one of the premier handheld studios in the industry, Rockstar Leeds. Set in a fictional Liberty City closely modeled after New York, the story centers on Huang Lee and his trials and tribulations as he tries to prove himself to his family, get vengeance for his father’s death and reclaim the prized ‘Yu Jian’, a sword that has been a symbol of honor in the Lee family for generations. A DS game created in Rockstar’s signature style, you can expect over-the-top characters, a massive storyline, insane action and plenty of vehicular mayhem around every corner.

The Grand Theft Auto franchise has become synonymous with a staggering variety and quality of music over the years. It was with this tradition in mind that we set out to deliver a soundtrack for our first Nintendo DS title, Grand Theft Auto: Chinatown Wars that would capture the spirit of our favorite genres and past stations.

Grand Theft Auto: Chinatown Wars creates original music for notable stations, including: Electro-Choc, IF99, Tuff Gong, The Beat and Radio Broker. This mixture of original and licensed instrumentals has been hand-selected by some of the most notable producers, in their respective fields. Deadmau5, Truth & soul, Ticklah, Prairie Cartel and Alchemist were hands-on in their approach to ensure that their stations overall pace and vibe was on par with the games overall, pick up and play handheld style while remaining true to the integrity of a Grand Theft Auto soundtrack experience.