by: Randy - posted: 2/5/2009 10:59:00 PM
More On: Street Fighter 4
I didn't get a degree in marketing or nothin', but announcing downloadable content twelve days before your game even hits store shelves seems a tad early.  But that's exactly what Capcom's done with Street Fighter IV.  (I'm guessing different rules apply to teasing out your DLC when your game's already been in arcades for some months.)  The first bit of DLC--called the Championship Mode Expansion Pack--will include the following (free) stuff on launch date:
The second batch of DLC--sets of alternate costumes--is gonna cost you, though (320 MS Points or $3.99 on PSN for each pack):
So take that, used videogame market.  You're not going to be getting too many returned copies of Street Fighter IV for at least a month.  Here's some pics of the alt costumes already on their way: 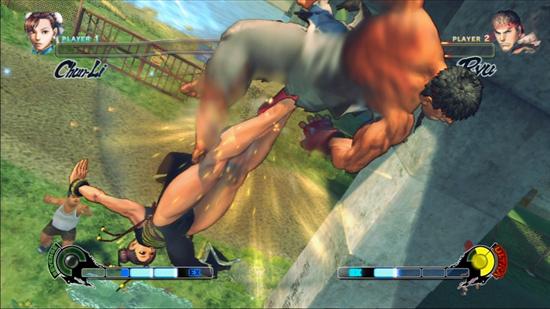 Capcom is pleased to announce the first expansion pack for Street Fighter IV. Championship Mode expansion pack will add several unique and gameplay enriching options to Street Fighter IV's already robust feature set free of charge post launch. Street Fighter IV's Championship Mode Expansion Pack will include:
Additionally, we are announcing the DLC alternate costume expansion packs for Street Fighter IV to customize your fighters. Each DLC pack offers an alternate costume for you favorite Street Fighter IV character. The packs are grouped by themes and will be available for 320 MS points for Xbox 360 or $3.99 on PlayStation 3 post launch.
We've just uploaded new screens to our press site featuring the alternate costumes. Please visit: www.press.capcom.com to view and download the new media.
For more information and exclusive Capcom-Unity screens, please visit: http://www.capcom-unity.com/s-kill/blog/2009/02/05/street_fighter_iv_dlc_details_and_exclusive_screens
We're only twelve days away from Street Fighter bliss! If you are in the LA area, come out to the awesome Street Fighter IV Launch event happening Feb 12, 2009. You can even win a copy of the game a week early than the official release date! Hope to see you there.
For more info on the event, please visit: http://www.capcom-unity.com/s-kill/blog/2009/02/03/youre_invited_the_street_fighter_iv_launch_event_
Additionally, Capcom is also confirming Bionic Commando, for the Xbox 360 and PlayStation 3, will be releasing this May with the PC version available in the following months.
Reloaded for the latest generation of hardware, Bionic Commando sees the return of the ultimate fusion of man and machine. A favorite amongst gamers around the world when first launched 20 years ago with the 8-bit original on the NES. Bionic Commando features Nathan Spencer (voiced by former lead singer of Faith No More, Mike Patton), as a government operative who, after distinguishing himself in a fierce conflict against the Imperials, is betrayed and falsely imprisoned by the very people he unquestioningly served.
Five years later, on the day he is due to be executed for his supposed crimes, an experimental weapon detonates the city. Unleashing an immensely powerful earthquake combined with a radiation shockwave that leaves the city in ruins, wiping out its populace. Military intelligence suggests that a large terrorist search force has moved in and occupied Ascension City, but as yet their motives remain unclear. With the terrain in ruins and the terrorists in control of the City's air defenses the FSA has only one option open to them – the reactivation of Nathan Spencer.
Both the Bionic Arm and swing mechanic that made the original game so unique makes a welcome return. Upgraded to deliver a range of devastating attacks that allow Spencer to quickly traverse the game's diverse environments, players can harness the power of the arm in a variety of ways to take out enemies - launch huge boulders or cars; send them flying with a close-quarters uppercut; use enemies as a shield or whip them into the air transforming them into a human kite.
For more information, please visit: http://www.capcom-unity.com/snow_infernus/blog/2009/02/05/bionic_commando_release_date