Question of the Week: What game or company would you grant a pardon to?

by: Randy - posted: 1/23/2009 12:00:00 AM
More On: News Roundup
One of the privileges of power in the United States is that U.S. Presidents (and actually state governors, too, within their state) have the right to pardon criminals.  In honor of America getting a new president--and actually because it's as close as we'll get at GamingNexus to exerting such Oval Office omnipotence--we ask you:

What game or company would you grant a pardon to?

Ben Berry:  I officially pardon all developers and publishers for not pushing more titles for the Wii. Failing to take advantage of the motion-based controls is a grevious error that doesn't allow the growing base of installed Wii's to be used to thier fullest capabilities.  (Now Playing:  NPPL: Championship Paintball 2009)

Elliot Bonnie:  I will pardon Epic Games for the faulty matchmaking in Gears of War 2. Hopefully we will be getting the promised fix within the next week or so.  (Now Playing:  Fable II, FIFA 09, Left 4 Dead)

Sean Colleli:  I pardon Free Radical Design for the lackluster Haze, and I hope it's not too late for them.  They are one of the only studios that pokes fun at gaming as a genre, and it'd be a shame if Timesplitters 4 never happened.  One flub shouldn't doom a studio full of otherwise funny and extremely talented people.  (Now Playing:  Rock Band 2, A Kingdom for Keflings)

Charles Husemann:  I officially pardon EA for their rampant crimes against gamers from 2000-2006.  After years of blatant license and franchise milking they've turned to creating new licenses and focused on innovative games and fostered an environment where creativity is key.  Sure not all the games have been commercial successes but they get an A for effort.  (Now Playing:  Killzone 2, Team Fortress 2)

Randy Kalista:  I do hereby grant presidential pardon to VGA Gamer God award recipient Will Wright.  Despite my efforts to blackout the barrage of hyperbolized claims and brazen overstatements, I was not entirely immune to the hype train pushing Spore to the forefront of the entire PC gaming community.  And even though Spore contributed marvelously to 2008 being the Year of User-Generated Content (see also: LittleBigPlanet, Banjo Kazooie: Nuts and Bolts), his sadistically economic-minded drivel to "rather have the Metacritic and sales of Sims 2 than the Metacritic and sales of Half-Life" is the singular statement that should've had him impeached as a "Gamer God."  Keep those comments to yourself, Mr. Wright.  My word.  (Now Playing:  Commander in Chief - Geopolitical Simulator 2009, Fable II, Left 4 Dead)

Nathan Murray:  From the desk of the Comissioner of Gaming Police [Date: 1/1/08]:  Treyarch and its staff will be released from Guantanamo Bay after finding no connection to or an grounds for the allegations that they participated in the practice of dumpster diving and stealing resources and ideas from Infinity Ward. Despite being tortured for days by being forced to play Call of Duty 3 over and over again no one would talk and without any further proof there is no way we can legally hold them in detention any further but we will continue to watch them for any suspicous activity.  Signed, Comissioner Gordon Freeman.  (Now Playing:  Rock Band 2, Call of Duty 4: Modern Warfare)

Sean Nack:  I, Consul Sean of the Republic of Sean, hereby pardon Alone In The Dark and Atari for making a fantastically innovative game with near-disastrous flaws and a crappy ending, on the condition that they be a little more patient with their de-bugging, really think about their endings in the future, and maybe not go bankrupt during development again. I also pardon Far Cry 2 for having an incredibly depressing ending, the diamond-gymnastics situation, and having the voice-acting done by relatives of the Micro Machines guy, on the grounds of it being otherwise pretty awesome.  (Now Playing:  Fable II, Call of Duty: World at War, Left 4 Dead)

John Yan:  I, John Yan, officially pardon major game companies using restrictive DRM such as SecuROM and give you all a clean slate to do the right thing. I see some of you guys are coming around and not making it a hassle for PC gamers to play your game. For those that haven't come around, you have your chance to get on the train now and stop treating your paying customers unfairly. I hope everyone sees that the old ways of protecting your software on the PC doesn't work anymore.  (Now Playing:  Gears of War 2, Left 4 Dead)


[And while Left 4 Dead is most prominent on our staff's playlist, Commander in Chief is the newest entry this week.] 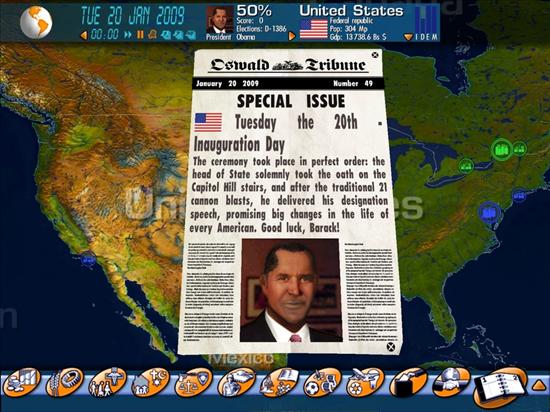