by: Randy - posted: 11/12/2008 11:12:00 PM
More On: EVE Online
The ninth free expansion for the EVE Online universe, Quantum Rise, has just fit the second of two parts into place for the full expansion.  The first part was making it so that 1,000-ship battles could take place with reduced lag (not to mention the lag relief this provided for major market hubs).  The second part features (partly):
This spattering of screenshots show off the moveable HUD, redesigned stargates, certificates (for bragging rights), and that new Orca ship (the flat, wide-bodied beauty). 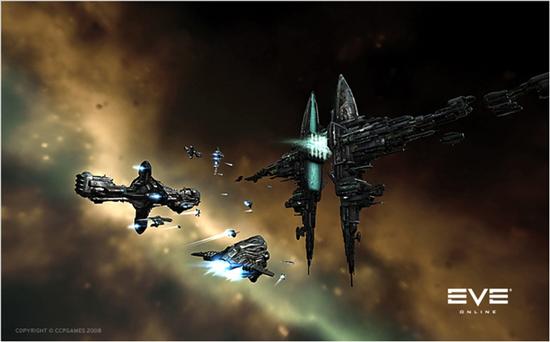 Reykjavik, Iceland November 12, 2008- CCP, one of the world’s leading independent game developers, today fully deployed EVE Online: Quantum Rise, the ninth free expansion for EVE Online. In September, CCP pushed the first staged delivery of Quantum Rise to the servers ahead of schedule—allowing for impressive 1000-player single-system battles and slashing lag in major market hubs and across all aspects of gameplay. Today’s release brings the final pieces of Quantum Rise to players and sets the stage for future expansions.

Several improvements in Quantum Rise include:

·       In-game Subscription Services allow players to convert 60-day EVE Time Codes (ETCs) into two 30-day items in game. They can be traded freely through all regular means (via market or contract or directly between players) and can be activated at any time

“Quantum Rise is yet another successful iteration on an already great game with a proven track record of delivering a deep, immersive, intelligent experience for one of the most demanding audiences in the MMO industry,” says Torfi Frans Olafsson, Senior Producer for EVE Online. “We are proud to be delivering Quantum Rise as a continuation of our vision of building the ultimate science-fiction simulator that we will continue to grow and enhance until Earth will be taken over by extraterrestrial races and we will be forced to put the project on hold while we take up arms and liberate our home planet.”

A full list of additions for EVE Online: Quantum Rise can be found on the features page:

CCP is proud to bring Quantum Rise to you just days after EVE Fanfest in Reykjavik, Iceland, where there were several major announcements during the keynote speech for the legions of dedicated fans in attendance. Check in with www.eveonline.com over the coming weeks for more information and a recap of the Fifth Annual Party at the Top of the World.

About EVE Online
Set tens of thousands of years in the future, EVE Online is a breathtaking journey to the stars, to an immersive experience filled with adventure, riches, danger and glory. With nearly a quarter of a million subscribers worldwide inhabiting the same virtual universe, EVE features a vast player-run economy where your greatest asset is the starship, designed to accommodate your specific needs, skills and ambitions. EVE offers professions ranging from commodities trader to mercenary, industrial entrepreneur to pirate, mining engineer to battle fleet commander or any combination of these and much more. From brokering business deals to waging war, you will have access to a diverse array of sophisticated tools and interfaces to forge your own destiny in EVE. Learn more and sign up for a free trial at www.eveonline.com.

Definition of Subscribers
EVE Online subscribers include individuals who have paid a subscription fee or have an active electronic time code (ETC) to play EVE Online, as well as those who have purchased the game and are within their free month of access. The above definition excludes all players under free promotional subscriptions, expired or cancelled subscriptions and expired ETCs.

About CCP
CCP is widely recognized as an industry-leading pioneer of the single-server persistent universe architecture as the developer and publisher of EVE Online, the critically-acclaimed, science fiction-based massively multiplayer online game (MMOG). Utilizing a cross-discipline approach combining cutting-edge technology and artistic excellence, CCP is dedicated to providing vibrant, compelling products that transcend the boundaries of conventional MMOGs and facilitate social networking through virtual worlds. Privately held and founded in Reykjavik, Iceland in 1997, CCP’s international reach now spans the globe with offices in Atlanta and Shanghai as well as a base of operations in London. More information about CCP is available at the company’s website, www.ccpgames.com.