by: Randy - posted: 11/5/2008 12:00:00 AM
More On: Elemental: War of Magic
Stardock has announced its next project -- the PC fantasy strategy Elemental: War of Magic.  These screenshots show off Stardock's penchant for beautiful yet non-taxing graphics and clean-lined art styles.  Even though it isn't due until February of 2010 (via retail and Impulse), Elemental looks like it won't have any problems running on the machine sitting in front of you today.  Please join me in a collective sigh of relief in knowing that there's at least one game on the horizon that won't insult you for not having an EVGA GeForce 8800 Ultra Superclocked in your machine right now.

A public beta is scheduled for Spring 2009.  And with Stardock's stunning record, this one's gone to the top of my must-play list, with a bullet.  (My only misgiving is that Elemental: War of Magic's name is not as stunning as Stardock's Demigod or Sins of a Solar Empire.) 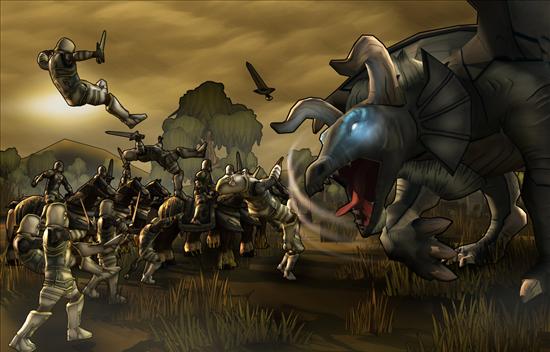 PLYMOUTH MI – NOVEMBER 4, 2008 – Stardock announced its next major PC game, Elemental: War of Magic today. Stardock, the company that has released such award-winning PC games such as Galactic Civilizations, Ironclad’s Sins of a Solar Empire and is nearing the release date of Gas Powered Games’ Demigod has set the retail launch date of Elemental: War of Magic (www.elementalgame.com) for the first quarter of 2010 at $49.95 with a public beta starting next Spring.

Like all Stardock titles, Elemental: War of Magic will include no on-disk DRM and will be available for re-download and updates through the Impulse digital distribution platform (www.impulsedriven.com) regardless of wherever it is purchased.

Elemental: War of Magic is set in a world filled with magic and ancient lore. As the ruler of your kingdom, you must expand your empire through a combination of magical power, military might, diplomatic skill, technological advancement and bold adventuring. Your worlds will be of your choosing, or players are free to create their own.

The story of Elemental: War of Magic begins with an immersive single player campaign with you being the only person in your kingdom with the ability to channel magic through mysterious shards of magic that are scattered across the world.  These shards, a result of a tremendous cataclysm that occurred a century prior when powerful beings waged war across the world, are the source of much of the world’s magic.

With the powers of old now gone, you now hold the key to the use of magic in your land. As ruler of your land and a channeler of magic, you must decide how much of your power to imbue into your heroes as you build new cities, explore dungeons, perfect spells of ever-increasing power and negotiate with friends and foes alike. Other channelers in the world, whether they be of the race of Men, The Fallen or the Beasts, are also able to access magic and may not share your vision of the world.

Harnessing the technology of ImpulseReactor™, ground-breaking multiplayer modes include traditional skirmish modes as well as a persistent universe mode. Additionally, integrated modding support allows players to submit maps, items, creatures, races, technologies, spells, buildings, environments and much more from right within the game and become available to all players of the game seamlessly.

A public beta is scheduled for the second quarter of 2009. For more information, please visit www.stardock.com or www.elementalgame.com.

Stardock is one of the world’s leading developers and publishers of PC games and desktop software.  Its PC games include Sins of a Solar Empire, the highest rated and best selling PC strategy game of 2008 as well as the critically acclaimed Galactic Civilizations series. Its desktop software includes Object Desktop, WindowBlinds, and a host of other programs for customizing the Windows experience. Learn more about Stardock by visiting www.stardock.com.