by: Randy - posted: 10/17/2008 12:02:00 AM
More On: Far Cry 2
In yet another forward-thinking move by Ubisoft, Far Cry 2 is the first third-party video game to have an official place at Home, PlayStation 3's social gaming community.  These screenshots view the Far Cry 2 area, which launched today in North America's and Europe's closed beta for Home.  The game's space in Home will purportedly grow and evolve alongside Home itself, with future additions of new interactive features and functions creating "a living, growing platform" for both the Far Cry and PlayStation communities.  So far, the space contains a plethora of info on Far Cry 2's missions, non-playable characters, and other strategic elements to the game.  There's also a multiplayer game of Mancala (that uses bullets for game pieces), and the ability to explore a bombed-out train station serving as an ad hoc cafe -- a replica of an in-game environment.  Don't worry:  The cafe is registered with the Better Business Bureau. 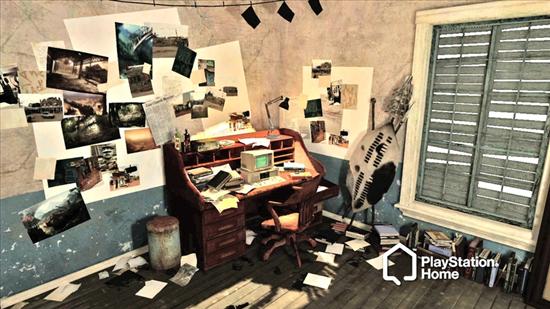 "We're absolutely thrilled to collaborate with PlayStation on this
ground-breaking endeavor and have Far Cry 2 be the first third-party video
game to have an official space in PlayStation Home,” said Tony Key, senior
vice president of marketing and sales, Ubisoft, U.S. "Far Cry 2's open world
setting offers players a level of immersion that very few video games can
match, and bringing that robust and dynamic environment to PlayStation Home
will allow players to further engage themselves in the game's gritty African
setting in fun and interactive ways.”

As Far Cry 2 pushes the envelope with the dynamic nature of its gameplay and
environments, so will its official space in PlayStation Home. The Far Cry 2
space will continue to grow and evolve alongside PlayStation Home, with
future additions of new interactive features and functions to create a
living, growing platform for both the Far Cry and PlayStation communities.
The recently launched Far Cry 2 space in PlayStation Home opens the doors
for players to explore the interactive area containing a wealth of
information about Far Cry 2's missions and non-playable characters, in
addition to other strategic elements of the game. Among the available
activities will be a multiplayer game of Mancala that will use bullets as
game pieces, the opportunity to explore in-game environments including a
bombed-out train station that has been turned into an ad hoc café, as well
as the ability to launch the game directly from the PlayStation Home space.

About Far Cry 2
Caught between two rival factions in war-torn Africa, you are sent to take
out "The Jackal,” a mysterious character who has rekindled the conflict
between the warlords, jeopardizing thousands of lives. In order to fulfill
your mission you will have to play the factions against each other, identify
and exploit their weaknesses and neutralize their superior numbers and
firepower with surprise, subversion, cunning and, of course, brute force.
Far Cry 2 is rated "M” for Mature and will ship to retailers on October 21st
for the PLAYSTATION®3 computer entertainment system, the Xbox 360® video
game and entertainment system from Microsoft and PC.

About Ubisoft
Ubisoft is a leading producer, publisher and distributor of interactive
entertainment products worldwide and has grown considerably through a strong
and diversified line-up of products and partnerships. Ubisoft has teams in
28 countries and distributes games in more than 55 countries around the
globe. It is committed to delivering high-quality, cutting-edge video game
titles to consumers. For the 2007–08 fiscal year Ubisoft generated sales of
928 million euros. To learn more, please visit www.ubisoftgroup.com.