by: Sean Colleli - posted: 8/31/2011 10:20:00 AM
More On: Legend of Zelda: Skyward Sword
As Chuck stated in his Deus Ex preview, the long summer drought is officially over. For Nintendo fans this means they (finally) get a solid chunk of good 3DS software. We also begin the countdown to The Legend of Zelda: Skyward Sword's November 20th release. To celebrate the Wii's swan song title, Nintendo will bundle the game with a limited edition gold Wii Remote and a music CD featuring live recordings of the Zelda 25th anniversary orchestral concert. Now that, people, is more like it.

Nintendo fans can also look forward to Super Mario 3D Land, Mario Kart 7, Professor Layton and the Last Specter and Tetris Axis. It's been a long time coming for people who bought the 3DS in March but as they say good things come to those that wait. One thing's for sure, that gold Wii remote will look great on my shelf next to the GoldenEye edition Classic Controller Pro. 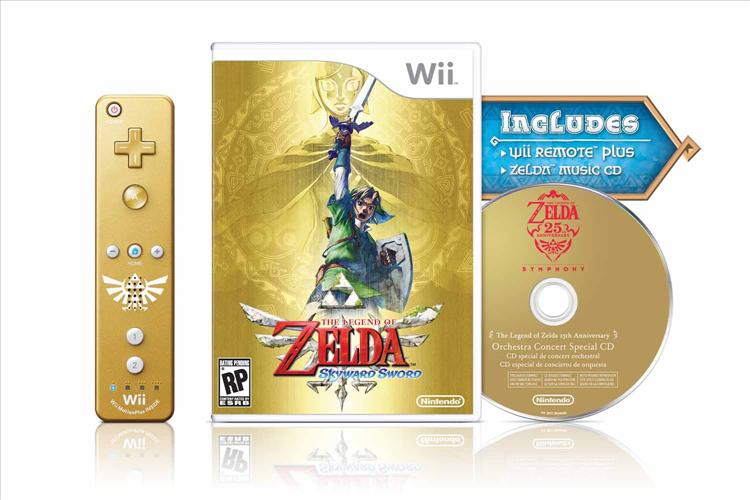 REDMOND, Wash.--(BUSINESS WIRE)-- Leaves won’t be the only things turning gold this fall as Nintendo prepares to launch an extraordinary lineup of games for its Wii™, Nintendo 3DS™ and Nintendo DS™ game systems. At a recent meeting of GameStop retail store managers from across the United States, Nintendo of America’s executive vice president of Sales & Marketing Scott Moffitt revealed new details about upcoming releases for several fan-favorite franchises:

A special limited-edition The Legend of Zelda™: Skyward Sword bundle containing the game and a gold* Wii Remote™ Plus controller will be available when the game launches on Nov. 20.
Also for The Legend of Zelda: Skyward Sword, every copy in the initial production of the game will come packaged with a special music CD featuring orchestral arrangements of select songs that will be performed at The Legend of Zelda 25th Anniversary Symphony Concert.
Nintendo will launch the upcoming Tetris®: Axis game for Nintendo 3DS systems on Oct. 2.
The Professor Layton and the Last Specter™ game for the Nintendo DS family of systems will launch Oct. 17.

“Nintendo has something for you this fall, no matter what type of gamer you are, no matter what Nintendo system you’re playing,” said Moffitt. “Whether you’re looking for a world-spanning epic like The Legend of Zelda: Skyward Sword, the pick-up-and-play puzzle fun of Tetris: Axis or the mind-bending adventure of Professor Layton and the Last Specter, we’ve got you covered.”

The limited-edition gold controller bundle for The Legend of Zelda: Skyward Sword will be offered at a suggested retail price of $69.99. The game will also be sold separately at a suggested retail price of $49.99, though the gold controller will only be available as part of the special bundle. As an additional 25th anniversary treat for fans who purchase the game early, every copy in the initial production, whether sold by itself or as a part of the limited-edition bundle, will come with a free CD featuring select orchestral arrangements of iconic music spanning the history of the franchise which will be performed at The Legend of Zelda 25th Anniversary Symphony Concert performances in October 2011. For more information about The Legend of Zelda: Skyward Sword, visit http://www.zelda.com/skywardsword.

The original portable Tetris® game was a smash hit on the Game Boy™ system. The new Tetris: Axis game lets players use the magic of the Nintendo 3DS system to jump into the action in 3D without the need for special glasses. The game includes more than 20 different modes – some familiar, some new. Up to eight players can compete in wireless multiplayer battles, even if only one player has a game card**. Tetris: Axis also makes use of the augmented-reality and SpotPass™ features of Nintendo 3DS. Tetris: Axis is part of a stirring fall lineup for Nintendo 3DS that also includes Pokémon™ Rumble Blast (launching Oct. 24), Super Mario 3D Land™ (November) and Mario Kart™ 7 (December).