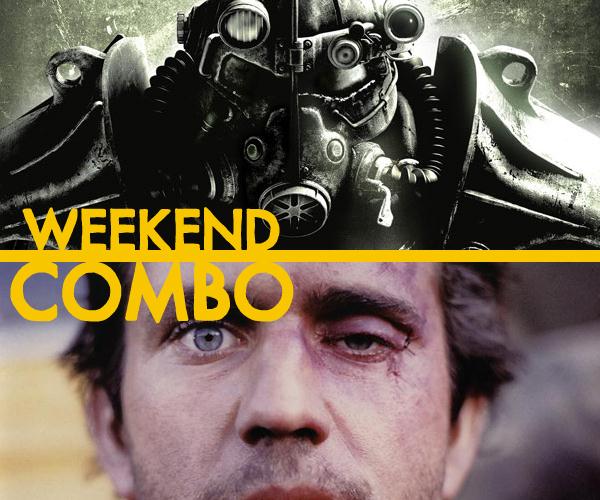 Weekend Combo is a weekly feature that helps optimize your weekend for the maximum amount of entertainment and ideal combination of video games, movies, television series, novels, and comics. Warning: May cause extended periods in which lack of motivation, loss of time, social isolation, and disregard for hygiene may occur.

In this installment of Weekend Combo, we head to the post-apocalyptic playgrounds of Fallout 3 and Mad Max 2: The Road Warrior with a sawn-off shotgun and a scruffy, but trustworthy dog. Prepare yourself because this journey will be a harsh and unforgiving one with an assortment of brutal marauders and deadly mutants. Not surprisingly, the various games in the Fallout universe contain many references to the Mad Max films. Even one of the initial screenshots of Fallout 3 showcases a similar scene to the iconic image of "Mad" Max Rockatansky walking beside his dog on an empty highway. Of course, both are set in two very different time periods and premises. However, they share a variety of similarities with the largest being their setting taking place in unrelenting wastelands. From Mel Gibson racing down an Australian highway in his roaring V-8 Pursuit Special interceptor to shooting a mini nuke into the face of super mutant behemoth, this combo will significantly boost your weekend intensity level.

Fallout 3 is the restart of the popular action role-playing series by Bethesda Game Studios that many feared would destroy the franchise. Thankfully, Bethesda clearly knew what they were doing with the property and introduced fans and newcomers to a redesigned wasteland that included many of the series well-known nuances, yet provided a much-needed gameplay refresh. Copious amounts of gore, areas to explore, quests to complete, and even an assisted targeting system led to hours upon hours of addictive role-playing bliss. Add in a wealth of worthwhile downloadable content that extends the game far beyond its original end and you have one of the best role-playing games in recent years.
Many associate the 80s with an endless flurry of overly cheesy and low production films that shouldn't have been created in the first place. I'll have to refute those false accusations and declare that the 80s produced many life-changing and cult favorite films that are cherished with unconditional love by their fans. And thus enters the 1981 classic of Mad Max 2 or known better as The Road Warrior. Returning from the original Mad Max, Mel Gibson is simply a wasteland wanderer that only seeks to survive after the tragic death of his family. He soon comes into contact with a group of settlers that fight daily for their lives and home, which happens to be one of few remaining oil refineries. The treasure of the world is gas, and a band of vicious marauders will stop at nothing to gain access to the refinery. It becomes obvious that they need the help of Max, the road warrior. I must warn that after watching this film, you might want to become a road warrior yourself and own one of the last remaining V-8 interceptors.

The best plan of attack would involve watching The Road Warrior first and then proceeding with a marathon of Fallout 3 till the early hours of the morning. Wake up early the next day with the help of some coffee and power on through the story and any remaining downloadable content. If you desire some more post-apocalyptic movies, there are a couple of options for Saturday and Sunday nights. For those who like to cry a little and feel emotion in their movies, check out The Road with Viggo Mortensen. If you simply want more Mad Max, the third film in the series, Mad Max Beyond Thunderdome, is worth a single watch. After watching either of the films, head back to Fallout 3 and complete the huge assortment of side quests that remain in the game. Next week can be occupied with Fallout: New Vegas for even more radiated entertainment. Lastly, don't forget your gas mask and Geiger counter to make sure it stays a safe and enjoyable weekend.

Both Fallout 3 and Mad Max 2: The Road Warrior are ridiculously cheap making this weekend combo one heck of a deal. Fallout 3 can be purchased in a game of the year edition, which contains all of the downloadable content releases, for around or under $20. Mad Max 2: The Road Warrior is available on Netflix or can be rented online for a couple dollars over Amazon Instant Video and iTunes.