WWII will never go out of style: Hearts of Iron III: For the Motherland dev diary launches blitzkrieg through Belgium, into our hearts..

by: Nathaniel - posted: 4/6/2011 1:12:00 PM
More On: Hearts of Iron III: For the Motherland
WWII games generally get a bad rap at his point in the collective history of gaming, but considering how formative it was for the modern world, hating it is like hating fire.

Others, for whom, WWII lives on in digital battlefields where there are never enough fascists to kill, games like Paradox Interactive's Hearts of Iron III: For the Motherland are there to ensure no digital Axis soldier (or Allied soldier, if that's what your into) goes unperforated.  Due for release on the PC in Q2 2011, it will allow gamers to command any nation in the largest conflict in human history.

For the Motherland is the second expansion for the critically acclaimed, and arguably, grandest WWII strategy game ever made. Features include War Goals, a new Partisan system, the ability to seize strategic resources, improved internal politics, a new coup system, and a battle scenario system with several unique mini-campaigns.

Man, that makes me wish I had a gaming-quality PC.

You can watch the new developer diary below or read the ongoing written dev diary here. 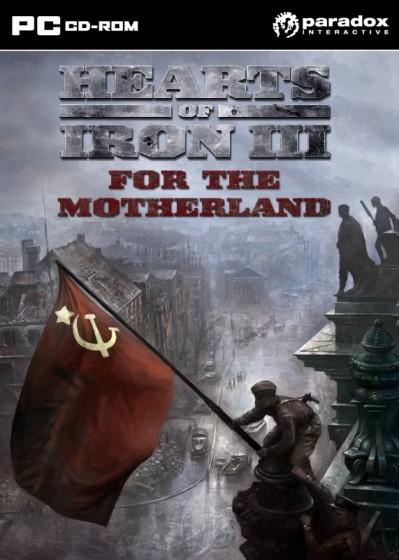 NEW YORK—April 6th, 2011— Paradox Interactive are happy to announce the launch of the first video developer diary for Hearts of Iron III: For the Motherland, due for release on PC in Q2 2011. It’s time to dust off the field marshal's baton and take command of any nation in World War II; the largest conflict in history. The developer diary series includes three video developer diaries that will be released on a monthly basis.

The second expansion to the critically acclaimed Hearts of Iron III lets you take charge - or delegate - at any level, from division to nation, through a variety of scenarios. Guide your country to glory from 1936 to 1948 - wage war on the battlefields, in the factories, and at the negotiating table, in the grandest of all World War II strategy games ever made.

Features
- War Goals and enforced peace, each member of the faction can demand their own slice and claim it when it is taken.
- New Partisan system, build Partisan undergrounds to organise your resistance movements and fight not just the occupier, but also other ideologies for control of the country.
- Seize strategic resources to fuel your war machine. New Theatre Interface giving greater strategic information.
- Improved Internal politics and a new coup system.
- Battle scenario system with several unique mini-campaigns.

About Paradox Interactive
Since 1999, Paradox Interactive has been a leading global developer and publisher of PC-based strategy games. World-renowned for its strategy catalog, the company holds a particularly strong presence in the United States and Europe. Its steadily-growing portfolio includes originally developed titles such as the critically acclaimed Europa Universalis, Crusader Kings, Victoria and the Hearts of Iron franchises, as well as publishing titles such as the Mount&Blade series, The Kings' Crusade, Majesty 2, Cities in Motion and Magicka. Paradox made an explosive entry onto consoles during 2010 with the release of Lead and Gold: Gangs of the Wild West. For more information, please visit www.paradoxplaza.com and follow http://www.facebook.com/ParadoxInteractive and www.twitter.com/pdxinteractive.