by: Chad - posted: 8/3/2010 8:52:00 PM
More On: Ghost Recon: Future Soldier
Sir Richard Branson walked into E3 with $1 million to announce Virgin Gaming's big push.  The latest development comes in the form of a partnership with Ubisoft.  Virgin Gaming will be the online tournament provider for some of Ubisoft's multiplayer console releases, starting with Tom Clancy's Ghost Recon: Future Soldier.  There will be a lot of prizes involved over the next year, so be sure to keep an eye on Virgin Gaming's site for all of the details. 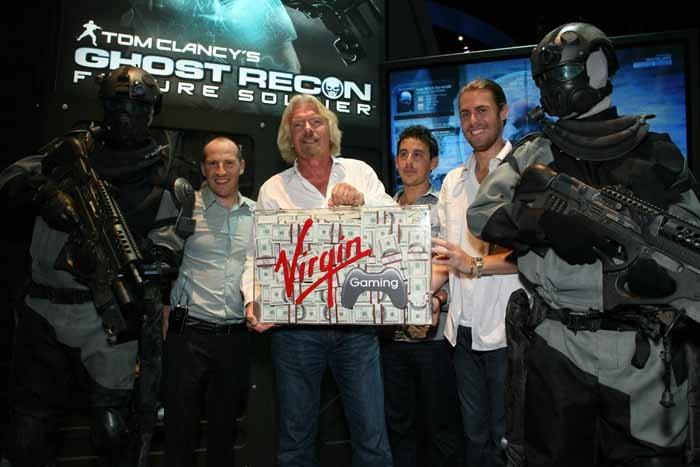 Virgin Gaming™ partners with Ubisoft®, CHALLENGES gamers to experience the Future of War

TORONTO, CA, August 3, 2010 – Virgin Gaming, the world's fastest growing online gaming community, today announced it has partnered with renowned publisher Ubisoft to be the online tournament provider for some of the publisher’s most anticipated multiplayer console releases. Leading the charge is Tom Clancy™’s Ghost Recon: Future Soldier™, the latest chapter in the award-winning franchise.

“Ubisoft is one of the leading video game publishers in the world and we are thrilled to offer our members the opportunity to compete in some of their best multiplayer console games,” said Rob Segal, CEO of Virgin Gaming. “Virgin Gaming is a unique convergence of social networking, video games and competitive gaming, and we are excited that Ubisoft shares our vision for the platform and its potential.”

“Ubisoft is thrilled to be partnering with Virgin Gaming on its new venture. We have an exciting lineup of multiplayer titles this year that we believe will be a perfect fit for gamers to play and compete against each other in a tournament setting,” said Laurent Detoc, president of Ubisoft North America.

Sir Richard Branson unveiled Virgin Gaming to an enthusiastic reception at this year’s Electronic Entertainment Expo (E3). The overwhelmingly positive response helped Virgin Gaming to quickly take the industry by storm, being the first online platform for gamers of all skill levels to compete in some of the best games for the biggest prizes. In true Virgin style, Branson kicked things off with dramatic flair, announcing that Virgin Gaming would give away over $1 million in cash and prizes over its first 12 months.

To experience Virgin Gaming firsthand and to learn why It Pays To Have Game™, please visit http://virgingaming.com.
About Virgin Gaming
Introduced in June 2010 through a partnership with WorldGaming.com, Virgin Gaming is the premier destination for competitive console gamers to meet, challenge and play in head-to head and tournament challenges for cash, points and prizes. With an array of proprietary features, including a Fair Play GuaranteeTM (with automatic results validation), a secure payment back end, and a Community Reputation Management System, Virgin Gaming allows gamers of all skill levels from around the world to safely and easily compete in some of their favorite multiplayer games. A leading-edge convergence of competitive online gaming and video games, Virgin Gaming offers robust community features with member pages, clan support, invitational tournaments, stats tracking, news, information, and more. For additional information, visit http://virgingaming.com.

About Ubisoft
Ubisoft is a leading producer, publisher and distributor of interactive entertainment products worldwide and has grown considerably through a strong and diversified line-up of products and partnerships. Ubisoft has offices in 26 countries and has sales in more than 55 countries around the globe. It is committed to delivering high-quality, cutting-edge video game titles to consumers. For the 2009-10 fiscal year Ubisoft generated sales of € 871 million. To learn more, please visit www.ubisoftgroup.com.