by: Randy - posted: 1/5/2009 11:26:00 PM
More On:
Nabbing a discount through GameStop or a sizeable digital distribution platform like Direct2Drive or Steam is status quo.  But a coupon straight from the vendor is a rare fine.  2K Games is handing out $10 off coupons--no limit--on select titles from their body of work, usable at participating retailers through January 31, 2009.  Known participating retailers include but are not limited to:  Wal-Mart, Target, Kmart, GameStop, Game Crazy, Virgin, Hastings, Meijer, f.y.e., and Fred Meyer.  The select titles are: 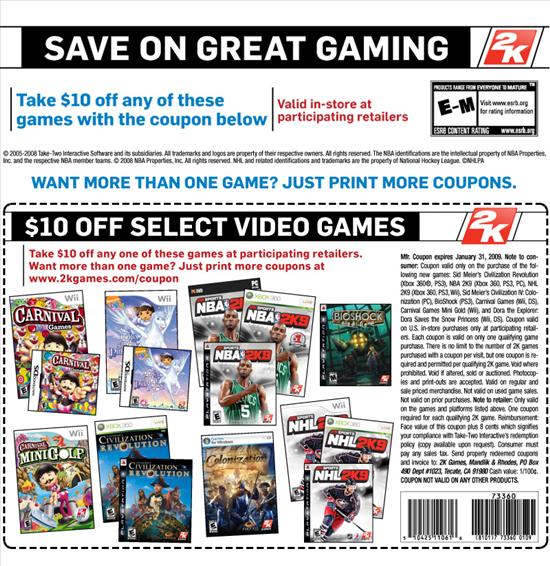 Helping to get 2009 off to a great start, 2K is pleased to announce a limited-time coupon, offering a $10 discount on some of its hottest gaming titles.

Starting today, consumers can go to www.2kgames.com/coupon or www.2ksports.com/coupon to receive a printable coupon that will allow them to save $10 on select titles from the 2K Sports, 2K Games and 2K Play family of labels. The coupon will be redeemable at participating retailers until January 31, 2009.

During this limited time, consumers can use the $10 off coupon on a selection of blockbusters on the PLAYSTATION®3 computer entertainment system, the Xbox 360® video game and entertainment system from Microsoft, Wii™ home video game system from Nintendo, Nintendo DS™ and Windows PC. Attached is a copy of this coupon, which is completely transferable. We encourage you to share it with your readers – and they can enjoy sharing it with their friends and families as well.

Below is the full list of titles that are included in the promotion:

Please note that the titles above range in rating from E for Everyone to M for Mature by the ESRB.