They've heard the cries of people that don't know how to drink liquids.  That's why they've produced Nuclear Energy Powder.  It comes in three "radioactive" flavors: Plutonium Pear, Uranium Yellowcake, Radium Raspberry Lemonade.  The powder comes in a re-sealable test tub and is sweet and tangy.

At only $2 per tube, why not check out the site and try some today? 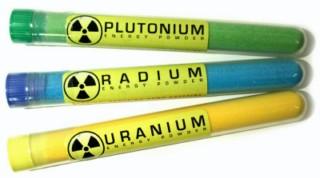 "Nuclear Energy Powder is a delicious way to avoid a meltdown," said Aaron Rasmussen, co-founder and vice president of marketing, Harcos Laboratories. "And yes, yellowcake actually tastes like cake: This cake is not a lie. What better way to get through your day than with the power of delicious nuclear energy?"

Packaged in a re-sealable test tube for maximum containment of the chemical compound that makes Nuclear Energy Powder so effective, each fuel rod offers 90mg of caffeine that can be taken throughout the day, though Harcos Laboratories recommends taking the 8 gram dose of energy powder over the course of an hour for optimal effectiveness. The sweet and tangy powder won't cause any of the rumored effects of radiation - including hair loss and/or death - but does leave behind a cool streak of color on the tongue. With a suggested MSRP of $1.99 per .3 oz tube, Nuclear Energy Powder is available now from http://www.nukeyourself.com and at retailers nationwide, including Hot Topic.

About Harcos Laboratories
Based in Santa Monica, Calif., Harcos Laboratories was founded by two gamer geeks who discovered new innovations at the intersection where gaming and consumer products merge with the launch of their first vitamin/energy beverage, Mana Energy Potion. Followed up by Health Energy Potion, both vitamin-infused drinks provide 5-8 hours of smooth, powerful energy with no sugar or after crash. Harcos Labs also fed the vampire craze with Blood Energy Potion, a fruit punch-flavored synthetic blood drink packed with iron, protein and electrolytes and conveniently packaged in a re-sealable transfusion-style bag. Their latest addition to the roster of unique products is Nuclear Energy Powder, a caffeinated candy available in three flavors. For additional information, please visit http://www.harcoslabs.com.