Read Nier’s graphic novel before you play the game

by: Tina - posted: 3/17/2010 10:16:00 PM
More On: Nier
If you’re boasting a rich storyline with awesome characters, what better way to prove it than to partner with DC Comics and create a custom comic series based on your awesome storyline?

Well, Square Enix has done just that with their action-RPG, Nier, which is set to release April 27th. The series promises to reveal key information about the world of Nier and a background of its history and current status tying into what vague details we already have of the storyline. Over the three comics to be released, we will also be getting insight into some of the characters, including Nier himself.

With not many other details besides this comic cover image below, all I can say is to expect the first of the series to release sometime before the game’s release date on the official website. Read on for the star-studded creators from DC Comics who will be working on the series. 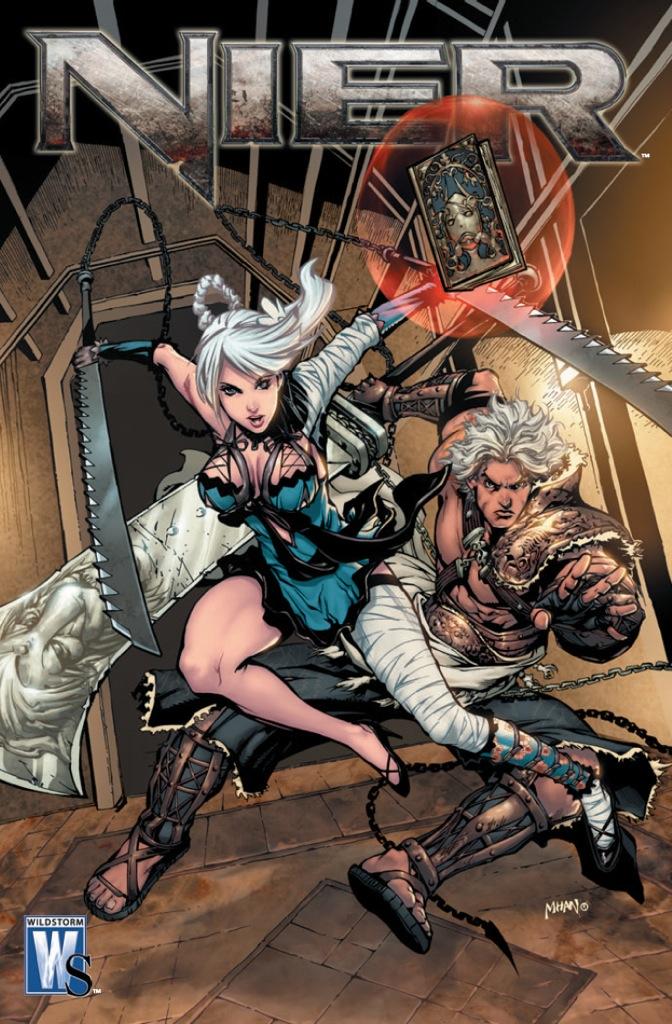 LOS ANGELES (March 17, 2010) – Square Enix, Inc., the publisher of Square Enix® interactive entertainment products in North America, is partnering with DC Comics imprint Wildstorm to create a custom comic series that will explore the rich and mysterious back story of the upcoming Action-RPG NIER™. NIER, whose unique content, characters and hidden, twisting storyline has transfixed gamers and media alike for months, will be available for PlayStation®3 computer entertainment system and the Xbox 360® video game and entertainment system from Microsoft at North American retail outlets on April 27, 2010.

“We are extremely excited to partner with the storytellers at DC Comics to further explore the complex tale of NIER; to explore its unusual characters; and, to introduce new fans to a storyline that will challenge what they know from beginning to end,” said John Yamamoto, president and chief executive officer of Square Enix, Inc. “NIER is a game that paints a sophisticated and graphic picture of the despair resulting from an apocalyptic plague and the triumph of a father’s will to protect his most prized possession, his daughter. DC Comics’ ability to create colorful and engaging comics will help deliver NIER’s unusual story to gamers and prepare them for what lies ahead in the game. By exploring the comics, gamers will understand the basis of Nier’s world before they even pick up a sword or cast a spell.”

The NIER comics will be available on the game’s official Web site at http://www.NIERGame.com, on Xbox LIVE® Arcade for the Xbox 360® video game and entertainment system from Microsoft, and on PlayStation®Store for PlayStation3 between now and April 27. The comics will reveal tantalizing clues about key characters from the game, including the title-character Nier; his disease-stricken daughter, Yonah; a conflicted and foul-mouthed fighting companion, Kainé; and, the talking book with an attitude, Grimoire Weiss. In addition, the NIER comics will address questions that have yet to be answered, namely, what sequence of events led to the fall of humanity? How was the deadly disease, The Black Scrawl, introduced to the earth? And, where did the terrifying Shades come from and why do they torment the few remaining survivors?

There will be three NIER comics in all, each telling a unique, yet overlapping story. The comics are being created by some of DC Comics’ most renowned creators and illustrators, including Emmy-winning creator and executive producer Ricardo Sanchez; Pop Mhan, whose work has appeared on everything from Spider-Man and Ghost Rider at Marvel Comics to Batgirl and The Flash at DC Comics; Eddie Nuñez, who works on the soon-to-be released DC Universe MMO; and, Carlos D’Anda, who has worked on notable comic book titles such as Justice League of America, Deathblow, and Lego’s Bionice, was the lead Character Designer on the bestselling Warner Bros. Interactive Entertainment’s Arkham Asylum and is the Lead concept Artist on the DC Universe MMO from Sony Online Entertainment.

The latest offering from the RPG-masters at Square Enix, NIER is an “Action-RPG” that blends traditional RPG gameplay mechanics with intense, bloody combat and powerful magic to create an action-packed single-player experience where players explore and discover a future lost to a shadowy past.

Developed by cavia Inc, NIER delivers on Square Enix’s renowned pedigree for creating unique and twisting storylines coupled with deep character development – a pedigree that has kept gamers around the world enraptured for decades.

Players will jump into the title role of the unyielding Nier as he begins his desperate quest to discover a cure for his daughter, Yonah, who is stricken with the deadly Black Scrawl disease. Armed with powerful magic as well as mighty swords, Nier will battle alongside formidable allies against waves of dark enemies and giant bosses to discover the truth about the disease, his daughter…and himself.

For more information about NIER, please visit the game’s official Web site at http://www.NIERGame.com/. Fans can also stay up-to-date with all of the latest screenshots, videos and breaking news by becoming a fan on the official Facebook page, at http://www.facebook.com/NIERGame.

NIER is rated M (Mature). Please visit the Entertainment Software Rating Board website at www.esrb.org for more information about ratings. NIER will be available at North American retailers for the suggested retail price of $59.99 for both PlayStation 3 and Xbox 360 systems.