by: Ben Berry - posted: 5/10/2010 7:36:00 PM
More On:
When you’re starting a company based on a single idea, picking the right time to go to market with your product is so key. You have to balance getting the product as close to “right” as possible without taking so long that you risk a competitor beating you to market. This was exactly the challenge that the folks behind the Powermat faced in developing their product line.

Released in fall of 2009, Powermat is a wireless charging system that makes use of a process called magnetic induction to charge devices wirelessly. This doesn’t happen automatically of course, or else someone would have thought of it sooner. The device to be charged has to be capable of accepting this type of charge, which is accomplished by replacing the back panel of the device.

The back panel contains the induction plate which allows the charge to occur and therein lies the problem. Because each type of device requires a unique back panel and Powermat doesn’t have other product lines to fall back on for profit while the product is building market, they were forced to limit the number of backs they made available. Currently, Powermat produces back panels for the iPhone, iPod Nano and Touch, 5 different Blackberrys, and the Nintendo DS.

For any other devices that they don’t manufacture backs for, there’s the Powercube; which uses the same concept as the replacement back panels, except it attaches through device via it’s regular power port. Each Powermat ships with a Powercube and comes with multiple adapters to handle nearly any type of charging port.

The standard Powermat itself is simple and sleek. Plug it in to a standard two prong wall outlet, and it’s always on; ready to charge up to three devices simultaneously. Black with a silver edging, its footprint is about the width of a narrow end table and has a clean look as at home in the office as it in the living room. There is also a portable version that can fold up for easy transport and a smaller mat that supports charging two devices.

I’ve been using the home unit next to our couch and the portable unit at my desk at work for almost a month. I picked up the back to my work phone (Blackberry Curve), and have been charging it at both locations. I also use the Powercube with micro USB adapter to charge my Nexus One.

The system works exactly as advertised; I simply put my work phone on one of the three charging plates, and it starts charging. If you don’t happen to notice the magnetic pull of the induction starting, the Powermat makes a noise to let you know when the device has been placed on or removed from the charging plate. Charging time is about the same as the devices natural charger.

The area where the device needs improvement is there are simply too few devices compatible with the truly wireless charging feature. Using the Powercube doesn’t feel any different than plugging the device into a standard charger, especially if you have to keep switching tips for different devices. Thankfully this is going to be rectified with the 2010 lineup from which will include the rechargeable batteries I saw earlier this year at CES. Instead of having to replace the back panel of your device, you simply replace the battery and the sensor that triggers the magnetic induction captures the electricity through the back of the device. The important news is that the batteries will be fully compatible with the first line of Powermats, so early adaptors won’t be penalized.

It only makes that Powermat brought their product to market with some innovations yet to be realized. The promise of the device is mostly realized, but until users are able to stop relying on the Powercube to power most devices, there’s money left on the table. If the rechargeable batteries work as expected and are available for a much wider range of products, the Powermat will go from technical novel to must-have product. 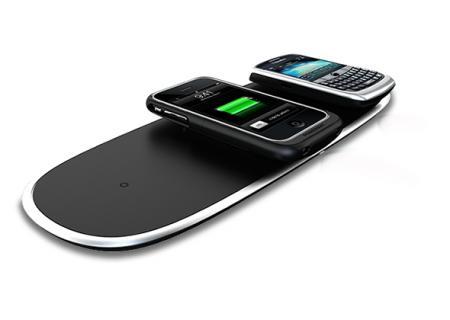