by: Randy - posted: 8/14/2008 11:13:00 PM
More On: Tabula Rasa
In what's become one of the most bizarre promotional campaigns for Tabula Rasa ever conceived, by one of the most bizarre developers in the video game industry, the Richard Garriott-sponsored Operation Immortality has now announced that immortality can be auctioned off.  Along with musicians Eric Johnson (who?) and Patrice Pike (who?!), author Tracy Hickman (oh, thank you), and others -- no doubt Garriott's done a cheek swab himself -- an August 20th auction will send one highest-bidder's digitized DNA into outer space with Richard Garriott to be planted on the ISS (International Space Station).  Now, should an Extinction Level Event smear the Earth to smitherenes, aliens could find the digital DNA and reconstruct the human race from the double-helixes of musician's musicians, pulp fantasy writers, failing MMO designers, and people with just a little bit more money than brains.  (Just kidding about that last set of people.  The auction's proceeds will benefit Planet Make-Over's non-profit Arts Endowment via the Nobelity Project.)

In all actuality, the sheer "Whiskey Tango Foxtrot" nature of this ad campaign is pretty brilliant, by my estimation.  But yeah, it would take a character as off-kilter and, uh, spacewalk-qualified as Richard Garriott to pull off something as nutty as this. 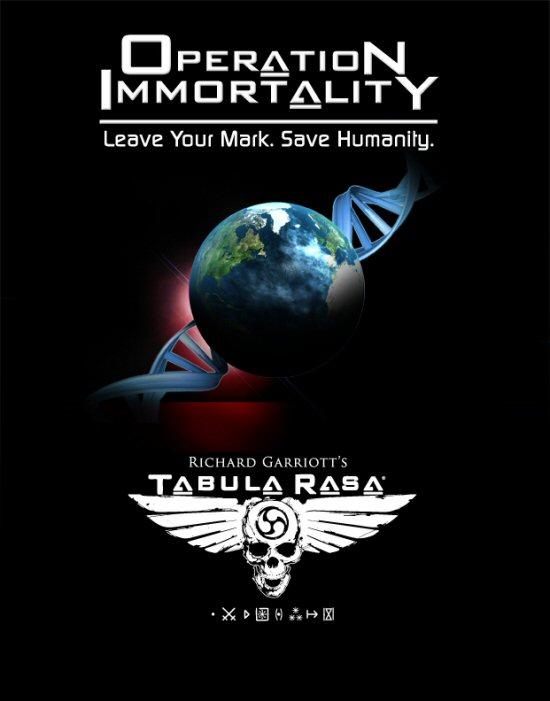 AUSTIN, Texas, Aug. 14, 2008—NCsoft® announced today that it will auction an opportunity for one person to send their digitized DNA into space on a special Operation Immortality sale on the popular Internet auction site, eBay. The news comes just days after the company announced that an Immortality Drive, a time capsule with the digitized DNA of select video gamers and space aficionados, and a collection of humankind’s greatest achievements, will be carried to the International Space Station (ISS) by famed game designer Richard Garriott on October 12.

The auction can be accessed at the Operation Immortality auction site located at http://cgi.ebay.com/ws/eBayISAPI.dll?ViewItem&item=250282465825. There are two items up for bidding in the auction. The first is a DNA swab kit, which allows users to swab the inside of their cheek and send the sample to a certified testing lab, which will provide a digitized version of the purchaser’s DNA to be placed on the special Immortality Drive. Garriott will leave the drive on the ISS prior to his return to Earth.

Players can be immortalized in Garriott’s latest game, Tabula Rasa® with the second item in the auction package, a character in Tabula Rasa to be named after the winner. Anyone who isn’t already playing the game can access a free trial at http://www.rgtr.com/trial.

The auction is currently open and will close on August 20.

About NCsoft Corporation
NCsoft North America is headquartered in Austin, Texas and is a wholly-owned subsidiary of Korea-based NCsoft Corporation. NCsoft, with its own development and publishing offices in Texas and California, also works with other NCsoft subsidiaries and third party developers throughout North America to develop and publish innovative online entertainment software products. The company has successfully launched multiple online titles in the last three years and continues to support its franchises, which include Lineage®/Lineage II, City of Heroes®/City of Villains®, Guild Wars®/Guild Wars Factions®/Guild Wars Nightfall®/Guild Wars: Eye of the North™, Richard Garriott's Tabula Rasa, Dungeon Runners™ and Exteel™. More information about NCsoft can be found at www.PlayNC.com.

About Planet Make Over

Planet Make-Over® is an interactive, entertainment driven, musician/celebrity-led, global movement to reverse the effects of global warming though social networking. The Planet Make-Over endowment for the arts is a pending 501(c) (3) non-profit organization with a mission to convert climate concerned people’s awareness into measurable action that enables the reversal of global warming through the efforts of Artists worldwide.

Planet Make-Over is designed to deliver compelling and dynamic information to millions of people via the Internet and virally spread it across social media networks through the impact of celebrity driven entertainment content beginning in January 2009.

AUSTIN, Texas, Aug. 14, 2008 – Operation Immortality™, the project to create a digital time capsule of the human race, has joined forces with famed author and game designer Tracy Hickman.  Hickman is best known for his work on the Dragonlance novels and the innovative Ravenloft module of the Advanced Dungeons and Dragons game system. As part of Operation Immortality’s mission to preserve the most talented and influential people of our time, Tracy Hickman will be sending his digitized DNA into space with video gaming luminary Richard Garriott as he travels to the International Space Station (ISS) on Oct. 12, 2008.

Hickman will not only be adding his digitized DNA to the “Immortality Drive,” excerpts of his writings will also be included on the storage device Garriott will store on the ISS as part of Operation Immortality.  The Immortality Drive is currently in the process of being loaded with information from people all over the world at the OperationImmortality.com website. Hickman will be talking about the project as he addresses crowds at the Gen Con gaming convention today in Indianapolis, Indiana.

Visitors to the website can submit their suggestions for humanity’s greatest achievements, leave their immortalized message for future generations, and may even have their DNA selected to join Garriott and other luminaries on an out of this world trip to possibly become the future of mankind.

Garriott is a game developer at NCsoft® and creator of the Ultima series of games and the recently released Tabula Rasa®. The goal of Operation Immortality is to have a space-borne record of human DNA and a record of humanity’s achievements in the event a global calamity dooms the human species, similar to what happens in the Tabula Rasa video game.

”Mankind is at its best whenever we set our vision to the stars,” Hickman said. “One of my first memories was of watching Alan Shepard fly his Mercury capsule atop a Redstone rocket. I have lived my entire life dreaming of space. ’Operation Immortality’ is essentially a celebration of that same adventuring spirit and an offering of hope for the future. I am deeply honored to participate.”

The Tabula Rasa team is thrilled by Hickman’s participation in Operation Immortality.  “Looking back to the influences that impacted my career, Tracy Hickman’s Chronicles series left a lasting impression on me,” said Tom Potter, Tabula Rasa’s lead designer.  “His novels were my first exposure to epic fantasy, and even though I read them at an early age, the setting and characters he created still continue to influence me all these years later.”

Media, including photos and videos, for this press release can be found at: http://www.rgtr.com/media_downloads/operation_immortality_gallery/index.html

Tracy Raye Hickman is a best-selling fantasy author, best known for his work on Dragonlance as a game designer and co-author with Margaret Weis.  They also wrote the Darksword trilogy, the Death Gate Cycle, and the Sovereign Stone trilogy. Tracy Hickman was born in Salt Lake City, Utah on November 26, 1955. He married his High School sweetheart, Laura Curtis, in 1977.  In 1981 -- between jobs and wanting to buy shoes for their children – Tracy and Laura approached TSR, Inc., the publisher of the Dungeons & Dragons games, about buying two of their game designs, including the original ‘Ravenloft’ adventure . . . and ended up with a job instead. That job lead to his association with Margaret Weis and their first novel publication together: the Dragonlance Chronicles.More recently, Tracy and his wife Laura have been able to fulfill a long-time dream of writing together. The Hickmans are currently working on their ‘Drakis’ trilogy (Daw Books) while Tracy continues his partnership with Weis with the upcoming six-book series, ‘Dragonships’ (Tor Books). More information can be found at www.trhickman.com.

About NCsoft Corporation
NCsoft North America is headquartered in Austin, Texas and is a wholly-owned subsidiary of Korea-based NCsoft Corporation. NCsoft, with its own development and publishing offices in Texas and California, also works with other NCsoft subsidiaries and third party developers throughout North America to develop and publish innovative online entertainment software products. The company has successfully launched multiple online titles in the last three years and continues to support its franchises, which include Lineage®/Lineage II, City of Heroes®/City of Villains®, Guild Wars®/Guild Wars Factions®/Guild Wars Nightfall®/Guild Wars: Eye of the North™, Richard Garriott's Tabula Rasa®, Dungeon Runners™ and Exteel™. More information about NCsoft can be found at www.PlayNC.com.