Brain Exercise contains a ton of puzzlers, including a built in full Sudoku game with bonus levels, global leaderboards, up to four player local multiplayer and the ability to compare test scores with friends on Facebook. Some of the other exercises include rock, paper scissors, inverted numbers, predominant number and more. Brain Exercise with Dr. Kawashima is available immediately on iTunes App Store for $5.99. 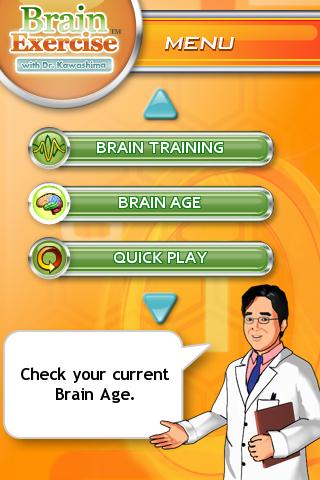 SAN JOSE, Calif.--(BUSINESS WIRE)--Fans of Apple’s iconic iPhone® and iPod touch are now able to use their favorite gadgets to mentally roll back the years thanks to Namco Bandai Networks Europe. The mobile gaming leader has today launched Brain Exercise™ with Dr. Kawashima, world-renowned neuroscientist and founding father of the brain training gaming genre. The game, which is published by Namco Networks America Inc, is specifically developed to take full advantage of the iPhone platform, is available to download from the App Store immediately and introduces a range of challenging games, scientifically proven to test and improve the performance of different areas of the brain.

Barry O’Neill, President, Namco Bandai Networks Europe commented, “It’s not often that Apple aficionados have to play catch-up but the 27 million users of Dr. Kawashima’s various brain training platforms are testament to the rise of this genre of casual gaming. We look forward to seeing how iPhone users rank against others who are already using Dr. Kawashima’s approved brain training games on the move.”

Namco Bandai has also simplified the process allowing Apple users to get their brain training fix. iPhone users can upload their brain age to the Global leaderboard and compete with the best brains in the world. They can also compare test scores with friends on Facebook, tracking their progress against the people who really matter. The Facebook application also offers a free “light” version of the game to let Facebook addicts test their mental muscle before embarking on their mobile training program.

The puzzles and games featured in Brain Exercise have all been officially tested by Dr. Kawashima at Japan’s distinguished Tohoku University to certify their brain-enhancing credentials. Users can test their brain age and track the progress of their daily training regime through a calendar. Over time, gamers can improve brain age and unlock new games as rewards for completing different stages. A full Sudoku game with bonus levels has also been included to help raise a mental sweat.

Brain Exercise has also ensured that brain training is no longer a solo sport. A new challenge mode allows up to four players to pit their neurons against each other by playing on one device.